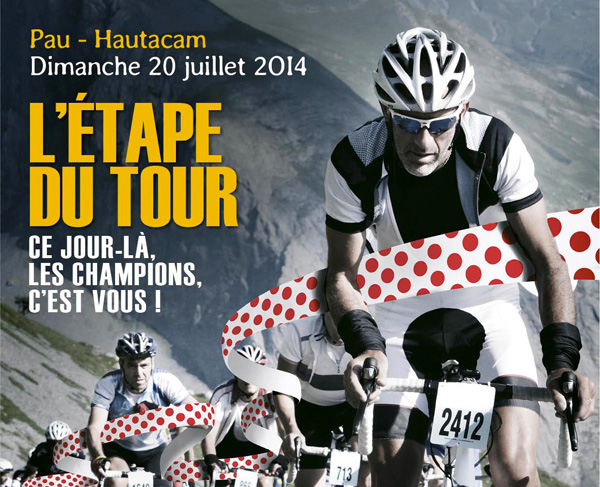 In less than a month, thousands of cyclists will participate in this year’s 22nd edition of the Etape du Tour, with the event once again starting and finishing in Pau and Hautacam – as it did in 2008.

This year’s event is hoping to surpass previous Tours, where 10,000 cyclist are expected to pass through the Pyrenees.

L’Etape du Tour, established in 1993 to allow amateur cyclists to test their legs on the route of one of the mountain stages in the Tour de France, has become the reference race for cyclosportive riders from all over the world.

Over 50 different nationalities are represented in the field. Riders come from faraway countries, all of them burning with the same passion for the Tour de France and the legendary French mountains.

Since L’Etape du Tour is a travelling race, it is a unique yearly chance to discover new regions and new landscapes, to combine a sports challenge with tourism in France.

In view of the success of the last few editions, we have implemented a solution which allows us to satisfy as many cyclists as possible.

On 20th July 2014, four days before the peloton passes by, cyclosportive riders will expected by thousands for the 22nd edition of L’Étape du Tour, on the route of the 18th stage of the Tour de France, marked out between Pau and Hautacam, with the ascent of the Tourmalet on the agenda. Pride of Place for the Giants of the Pyrenees.

For more than twenty years, the “cyclos” have been particularly inspired by the key event of the summer: L’Étape du Tour, THE benchmark race that amateur cyclists want to experience, the one where they have to prove themselves. They come to pursue the legend and finish the race thanks to sheer pedal power as part of a remarkable group of flat racers. By comparing themselves to the professional peloton’s champions, who will also climb the same slopes several days later, they will create a bond with them: by suffering in the same way, they will feel even closer to them.

To share this sensation, they will have to climb up the Pyrenean routes, which have long been regarded as monuments in the cycling world, at their own pace and in their own way. Once they have left Pau, their objective will be to climb up to the Col du Tourmalet, the summit of a 17.1km ascent which will begin in Sainte Marie de Campan, with an average gradient of 7.3%.The descent towards Luz Saint-Sauveur will provide the final stretch of respite before the riders face the fearsome ascent of the Hautacam, covering 13.6km with a gradient of 7.8%.

The challenge at hand, with two of the Tour de France’s most prestigious ascents, is ideal for climbing specialists. But with a distance of 148 kilometres, the overall profile will also be accessible to well prepared amateurs who want to experience the ultimate thrill.

The record number of 13,500 entrants and 10,627 finishers registered last year is likely to be surpassed!