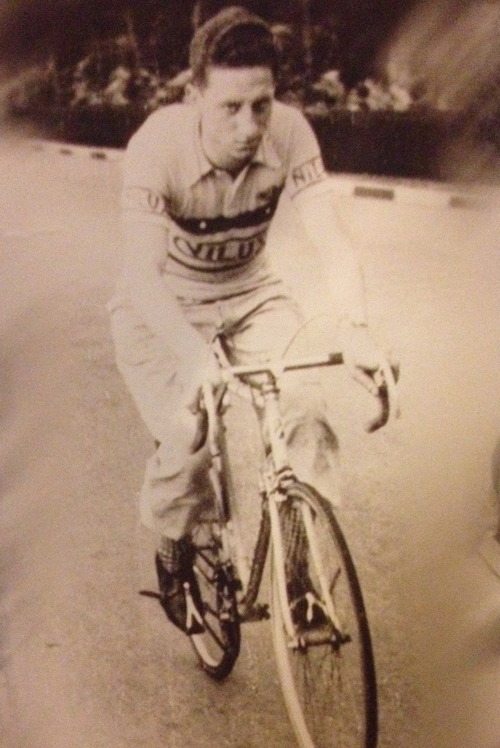 A face pops out of the window as we wait for the gate to open. “What is it, carnival?” That’s the first words we hear coming out of Ciano’s mouth. Our weird, modern-looking fixed gear bikes strike him right from the start. We are greeted at the door by Massimo Gardone, husband of Ciano’s daughter Alessandra. They warmly welcome us inside for a coffee and a yummy pasta crema as Ciano steps in. “I never thought you would be coming by bike” he says. Right from the start, judging from his fascinating face, you can tell that Luciano Muran has a lot to tell about bicycles. And as he sits down at the table to join us, we know it is going to be a one-of-a-kind afternoon.

"Fixed gear bikes…you do know bikes started out like that, do you? Then the great innovation of gear-shifting began and now you guys are right back where it all started" he says, not without a pinch of irony. "I did try fixed gear too, training in 1948 on the Costiera (coastline road in Trieste), going up and down. I remember crashing once, with one of those…tell me, what’s so appealing about it?" And we begin to explain the fascination of being one with your bike, the feel of the pedal pushing up behind you, the challenge of going everywhere, downhill and uphill, choosing one single gear, no way back…He understands, though we still remain quite a weird couple to him. "There were no sportsmen when I began riding as a kid. There were no, so to speak, sports clubs or associations. That was something that was only just beginning as I grew up. You were lucky if you had a bike, and that was it. And you would work, there was no such thing as surviving with sports, not like today I mean. I would work hard in a welding place, add some extra hours at night only to have a free morning the day later, to go and ride. That’s how I got my passion for riding."

And that’s when Luciano begins to tell us some amazing anecdotes of the 7 years he raced for the Nilux Milan cycling team, with ambitions of becoming a fast roueluer. He tells us about some historic riders from Trieste. Like Bruno Steffinlongo riding past his wife and yelling “you’ll have the machine!!” meaning that he would be able to buy her a sewing-machine since at the time medals were rigorously in the real metal and he was going for gold. That Bruno would never go riding without a pack of Alfa cigarettes.

That in the final years of the free territory of Trieste, right after the 2nd world war, he rode for a Slovenian cycling association. The riders of the free territory of Trieste had license to ride races both in Italy and in Slovenia. Amateurs couldn’t do stage races in Italy, but they could in Slovenia so that was the whole point: travel the whole of what used to be called Jugoslavia. An amazing trip, an adventure. Crazy roads, no assistance, no proper race organization…but Luciano got to see Belgrade traveling on his bike. It’s a way of riding that has disappeared in his opinion. He does not know that fixed gear (as well as Rapha and others) have brought back some of that romance, of that hard riding mixed with the thrill of the adventure. But he is quite right, since certainly ours is a niche.

Then the moment we were waiting for arrives. “Let’s go downstairs and see my bikes”. The lesson is about to begin…First he wants us to visit his place and we meet with his lovely wife Nives. Definitely a very modern old lady, walking about with an ipad in her hands and a lovely, welcoming smile on her face. Then, we finally go outside and together with Massimo we step into the garage and enter in Luciano’s world. We finally discover his bikes. “I’ve lived through the technical innovations of the bicycle. It started out just like your bikes. The first huge step forward was of course the freewhell, but to me more than that were the brakes. The Bowden cable transmission changed everything. That’s the cables we have today. Before that you would have spoon brakes which made it so difficult to change your tires because the brakes would pull from down upwards…Bowden transmission meant you could mount them sideways. And clinchers too, nobody would use those, they were totally unreliable and only tubulars worked.”

"But what changed everything once and for all was gear-shifting of course. The first system was called Vittoria and it meant you would simply have two cogs on the wheel. When you needed to change gear you had to stop, loosen the wheel, change gear, tighten and jump back on your saddle. The Vittoria-Margherita gear shifter was a great innovation. You would have a lever behind, running on the seat tube, to loosen the rear wheel without stopping, give it an inclination so that if you pedaled backwards you would insert the chain on the other cog and could tighten the wheel again and go."

"Then Campagnolo arrived, with his two lever gear shifter. Then came the French Simplex, the first with a chain stretcher. It meant you didn’t have to pedal backwards anymore to change gear. From there, the road to modern gear sets was quick and Campagnolo lead the pack. He was obsessed with precision and quality at the time, that’s why people today are still looking for all Campagnolo gear sets…"

Luciano’s eyes twinkle as he takes us by the hand in the history of the bicycle. he’s beginning to like us, we’re not weirdos anymore. We answer to his inputs appropriately and he realizes there’s some real passion lying inside of us. And some knowledge too (mostly thanks to my dear companion Alessandro Trevisan, I must admit). There’s some empathy going on, some kind of recognition that washes away every skepticism as we gradually turn from strangers into friends.

"Would you like a drink?" he says. Why not. He grabs us by the arm and takes to another small side room we hadn’t noticed. On the shelves, bottles of wine and some artisanal spirits he distills himself. One in particular is a grappa with erba Luigia which I’m driven too. Luciano asks his nephew Tobia to wash three glasses, he pours his liqueur and we have a toast with his stupendous grappa.

It’s time to leave, the sun sets and as usual we’ve got just tiny lights on our bikes, with worn out batteries…But we’ve found a new friend – a true gentleman – and it looks like he feels the same. The kindness as well as the liveliness of this man is extraordinary. He treasures deep inside a way of living that we are tragically loosing, a long-forgotten elegance.

"Do you guys cook?" is the final, unexpected question. Sure we do Luciano, I live on my own and my girlfriend’s totally into food and taught me good cooking. The Prof knows his tricks too. Luciano pops back in his "secret" room and steps out with two small glass jars in his hands filled with a cooking powder made my him and his wife picking mixed aromatic herbs in the countryside. For us. Okay, I guess that really means we’re friends now.