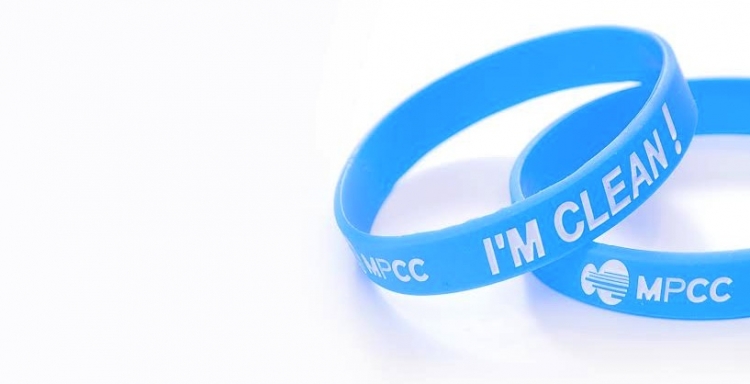 The MPCC (Movement for Credible Cycling) has adopted a new slogan and campaign  for 2014 – ‘I’m Clean’.

According to the MPCC to “wear this blue bracelet is claiming that cycling is a clean sport, regaining its credibility. MPCC expects from teams and riders that they invest proudly showing their membership and their involvement in the movement.”

Why does it change ?

In the offseason 2012/2013, MPCC launched its armed blue bracelet message "Doping, it’s enough". A wave of accession to the movement has followed by the teams, sponsors, organizers and federations. "Cycling was in shock following the Armstrong case. Everyone wanted to respond with a strong message," said Roger Legeay. This message was anger in response to the poisoned atmosphere that then knew our sport. A message of anger because despite these cases, cycling has changed. Today, the message of MPCC is: "I’m clean!"

The watchword of MPCC is commitment. It is possible to affirm it through a strong signal: wear this blue bracelet is claiming that cycling is a clean sport, regaining its credibility. MPCC expects from teams and riders that they invest proudly showing their membership and their involvement in the movement. The entire workforce of the Argos-Shimano team is already committed to wear the blue bracelet in 2014. MPCC sent 200 free copies to each member team : already numerous in many pelotons in 2013, they will be even more in 2014.

How to obtain it ?

Blue bracelet "I’m clean", like its predecessor, will be available for purchase at the end of january. MPCC encourages all people who support a credible commitment to cycling from fifty teams, eleven sponsors, seven organizations, eight federations and seven supporters members of MPCC, to get this bracelet. An activist approach doomed to illustrate the now predominant presence of MPCC among the players in this sport.

In a bid to market the new accessory the MPCC has shipped out 200 bracelets to each team.