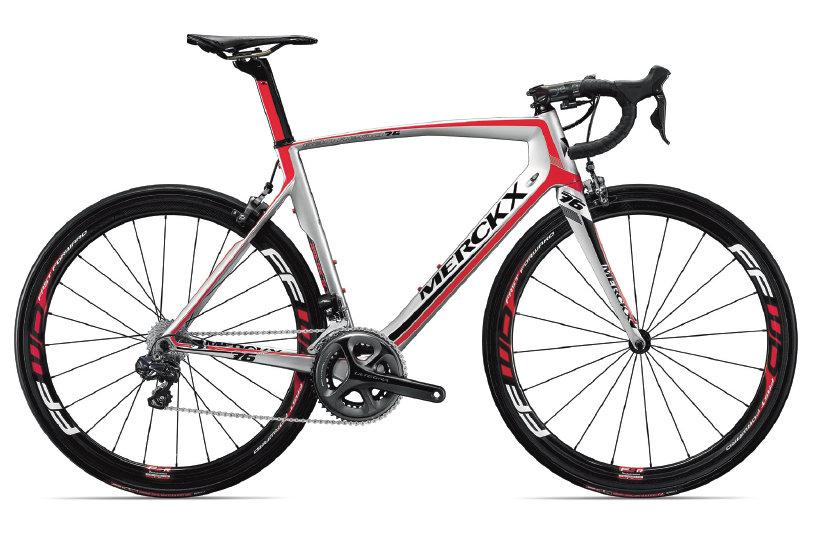 Following some spurious images on their website over the last several weeks, Eddy Merckx Cycles has officially unveiled their new 2015 road models called- the Mourenx69 and SanRemo76.

Both the SanRemo76 and Mourenx69, get their names from two of Merckx’s epic victories.

Indeed, Merckx first won the prestigious Milan-San Remo in 1966. And, from there, he went on to win the race a record seven times. The SanRemo76 represents his seventh and last victory.

Based on Merckx’s previous race level model, the EMX-525, the company is calling the 76, it’s high performance road bike, that’s aimed toward riders "who love to ride fast and want to compare themselves against other riders.”  To wit:

“The SanRemo76 is an extraordinary racing machine. It was designed and built for truly competitive cyclists whose ambition it is to go ever faster and be more efficient,” says Merckx.

The geometry features a longer top tube combined with a shorter head tube, to ensure riders a more aggressive and aerodynamic position. The frame is fabricated from two grades of carbon fiber, along with a full 1 1/8 – 1 1/2 inch carbon fork, as well as an oversize BB86 press-fit bottom bracket – to obtain the highest levels of vertical and lateral stiffness. It’s also compatible with both electronic and mechanical groupsets.

According to Merckx, the SanRemo76 weighs in at a hefty 1,122g, which seems high compared to other brands who are in fierce competition for producing the lightest bike(s) available. However, Merckx feels that stability, handling and responsiveness trump any desire for mere "light weightness" alone.

The 76 will be available in six sizes ranging from 47 to 61, with complete bikes available in Shimano 105 and Ultegra ( both electronic and mechanical) builds.

The Mourenx69 has been aptly named after Merckx’s epic 1969 Tour de France victory; particularly his stage 17 win from Luchon to Mourenx.

The "Cannibal" had already won four stages at that point in the race, and had distanced his closest rival by a staggering eight minutes. But that’s not all, Merckx would later attack on the infamous Col du Tourmalet, and embarked on a 140 kilometer solo breakaway, that would not only secure him the yellow jersey, but also earn him the mountains classification jersey as well.

Inspire by this feat, the Mourenx69 is Merckx’s newest endurance/sportive bike, that’s designed to give riders the edge they need to "go the distance".

Not surprisingly, the 69’s geometry is much more relaxed than that of the SanRemo76, wherein a taller head tube is used in relationship to a shorter top tube, in order to maximize comfort. In addition, the chainstays have been lengthened as well, as to provided a more compliant ride characteristic.

Similar to the 76, the Mourenx69 features a BB86 bottom bracket, along with an oversized full carbon fork as well. The frame is reported to weigh in at 1,055g, and features internal cable routing to accommodate both electronic and mechanical groupsets also.

The 69 will be available in both Shimano 105 and Ultegra mechanical builds, with wheel upgrades from FFWD in the offing as well.

Expect to see both new models on display at EuroBike later this month.