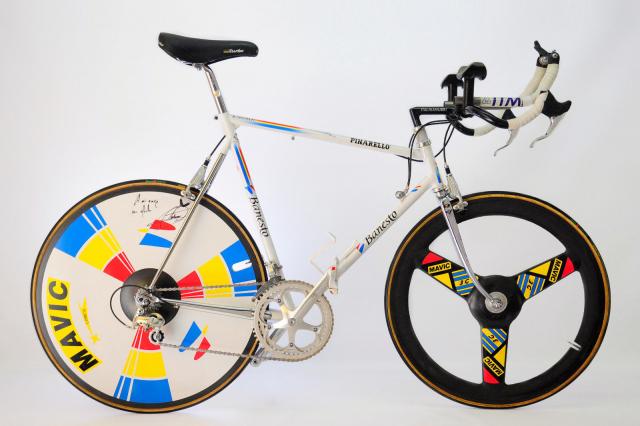 For a cool $75,000, you can be the ultimate "poseur" with Miguel Indurain’s 1992 Pinarello time trial bike – that he rode as a member of the infamous Banesto team.

History to this bicycle

Pinarello lost in 1990 and 1991, the contract for supplying  bicycles to the Banesto team due to refuse to label the frames with the word "Banesto" and withdraw its brand.

That years, Banesto reached an agreement for the bicycles supply with the Spanish builder Razesa, who decorated the frames with the Banesto brand.

In 1991 Miguel Indurain won his first ‘Tour of France’ with a bike Razesa. That made Pinarello reconsider its position and in 1992 Pinarello was again the bicycle supplier for the Banesto team.

This bike is the bicycle that Miguel Indurain used the first half 1992 season, from january to may.

In this period, rear legs and fork were chromed, identical to the Razesa 1991 bicycles.

In May 1992 (pre-giro), Pinarello supplied new frames for the team.

He time trial frame, have the planes tubes, head tube with spearhead form and the rear legs and fork painted. More aerodynamic and very light.

Miguel Indurain has donated this bike for a charity raffle in order to restore the church of San Juan of the Cordoba town Cabra (Spain).

Indurain donation has been made possible thanks to the intervention of a family to the cyclist’s relative a Franciscan Sister of the town.

In 2010 Miguel Indurain was invited to inaugurate a bike lane with his name in Alicante (Spain).

In this act Miguel signed the rear disc wheel and the frame and said: "I’m glad to see the bike so well preserved, with this bike I won the time trial of the Tour de Romandie 1992*. (…)"

The last photo is from that day.

For sale on Ebay or Vintage Luxury Bicycles

The bike is in mint or museum conditions. Used only low miles.

Only have milimetric marks on paint.

Miguel Indurain have at home the vast majority of bicycle use in his career.

This bike is one of the few in the world outside his private collection.