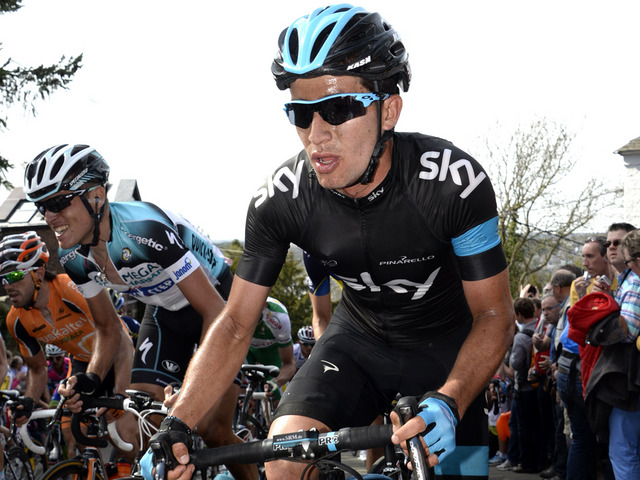 “Sergio was raised in the mountains, goes back in winter and lives and trains at different levels. We’ve looked as far as we can at the effects of this, but our own understanding is limited by a lack of scientific research into ‘altitude natives’ such as Sergio.We are commissioning independent scientific research to better understand the effects of prolonged periods at altitude after returning from sea level, specifically on altitude natives. The independent experts are looking to use Wada-accredited laboratories and Team Sky will make the data and findings available to Wada, the UCI and CADF.”

You may have already read the breaking news on Sergio Henao who has been taken off Team Sky’s racing schedule. No doubt many commentators have already come to the conclusion that ‘questions’ in out-of-competition, anti-doping testing means guilty. Maybe. But let’s look at the difficulties for cycling’s anti-doping enforcement to monitor the performance and physiology of ‘altitude natives’.

Sergio Henao was born in 1987 in the city of Rionegro, Columbia. The city is located in the central mountain range of the Andes at an average elevation of 2, 125 metres and has an ethnicity almost entirely of Mestizo origin (98.9%) – persons of combined European and Native American descent. Much to the delight of cycling physiologists and performance directors, these populations often acquire the unique ability to survive at extremely high altitudes, a special adaption which is now recognized as one of the finest examples of natural selection in action, appearing in the Himalayas, Andes and Ethiopia . This essentially means that these peoples living at high altitudes don’t experience the same damaging effects of this environment as humans from sea-level – which basically comes down to not getting enough oxygen into their tissues and experience altitude sickness.  For example at a height of 4,000m you would expect a 40% drop in oxygen levels, so a very harsh environment if you haven’t acclimatized.

Now from all our readings on EPO doping, we know that cyclists are looking to get as much oxygen to their muscles as possible. The overall oxygen delivery system (blood oxygen levels, as well as heart stroke volume, vascularization, and lung function) is one of the major limiting factors to muscles’ ability to perform endurance exercise. Therefore, the primary reason athletes may use EPO or other Erythropoiesis-stimulating agents is to improve oxygen delivery to muscles, which directly improves their endurance capacity. You would expect me to write that Tibetans & Andean people just have higher hemoglobin levels and are therefore able to transport the available oxygen to their muscles more efficiently. Well its not that simple.

I suppose in mother nature’s way of stopping increased blood viscosity, and thus increased likelihood of thrombosis and stroke, Tibetans actually have lower oxygen saturation in their tissues and lower red blood cell count than their ancestors – the Han Chinese.  Instead it seems that there was a gene selection for endothelial PAS domain protein 1 (EPAS1) in this population, with variations regulating the physiological responses to high-altitude hypoxia (low oxygen conditions) via a hypoxia-inducible transcription factor pathway (PLoS One paper on genetic adaptation in Sherpas). These responses include encoding for the HIF-2alpha protein, which up-regulates numerous hypoxia -inducible genes (including EPO) in the lung and other tissues. However mutations of EPAS-1 not only bring an advantage from EPO but include metabolism, vascular permeability (Hypoxia: adapting to high altitude by mutating EPAS-1) and  influence aerobic-anaerobic conditions in elite endurance athletes – including cardiovascular function, energetic demand, muscular activity and oxygen availability .

But, it doesn’t stop there. Sergio Henao is a South American. Tibetan and Andean populations exhibit quantitatively different responses to hypobaric hypoxic stress. At the same altitude, Tibetan mean resting ventilation and hypoxic ventilatory response were more than one-half standard deviation higher than Andean Aymara means while Tibetan mean oxygen saturation and hemoglobin concentration were more than one standard deviation below the Andean means. Yet when you compare Tibetan and Andean patterns of oxygen transport they appear equally effective functionally as evaluated by birthweight and maximal aerobic capacity across a range of altitudes (Contrasting adaptations – aka it is convergent adaptation and rose completely independently).

For our South American cyclist, it appears that adaptive changes maybe reflected in hypoxia sensing, rather than hypoxia response, mechanisms . However as described in this 2013 review are understanding of different highland groups is still on-going.

And so, when Team Sky say they need to do an altitude research programme, well it seems they might well have to. Our understanding of the athletes physiological profile is not without a few gaps!