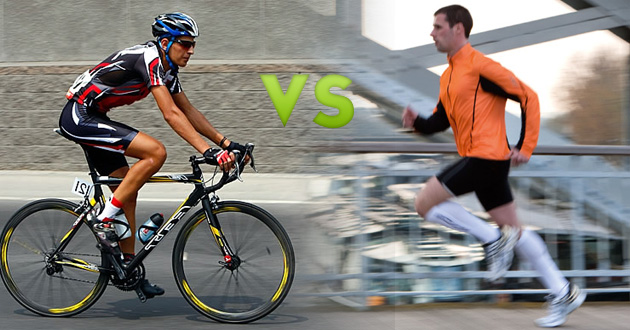 A new study shows that cycling is better exercise than running. The researchers say runners should include cycling as part of their training, and people taking up exercise should choose cycling over running to avoid injury.

The study, Immune and Inflammation Responses to a 3-day Period of Intensified Running versus Cycling, was conducted by the Appalachian State University (ASU) Human Performance Laboratory at the North Carolina Research Campus in Kannapolis. After a period of intense workouts, long-distance runners experienced more muscle damage, soreness and inflammation than cyclists. The study was published in the journal Brain, Behavior and Immunity in September 2013.

“Runners just can’t put in the same volume of exercise as cyclists without experiencing more inflammation, soreness and muscle damage,” said Principal Investigator David Nieman, DrPH, FACSM, director of the ASU Human Performance Laboratory. “Long-distance runners are encouraged to vary their training schedules, mixing higher and lower exercise workloads, and to include other training modalities like swimming or cycling to maintain the highest level of performance.”

In the study, non-smoking, 19 to 45 year-old, long-distance runners and cyclists who regularly competed in races worked out for 2.5 hours per day for three days. Blood samples were taken pre-exercise and at one, 14 and 38 hour intervals after the three days of exercise. The results conclusively showed that runners had greater muscle damage, inflammation and soreness compared to the cyclists.

A decrease in immune system function was similar in both runners and cyclists. The immune findings are in line with Nieman’s previous research published in 2012 in the Journal of Cytokine Research. The study, Variance in the Acute Inflammatory Repsonse to Prolonged Cycling is Linked to Excise Intensity,  demonstrated that the immune system reflects the physiologic stress experienced by the athlete.

For people who are not trained athletes but are interested in getting in better shape, Nieman recommends they start with cycling. “It is going to be a lot easier on the muscles,” he said.