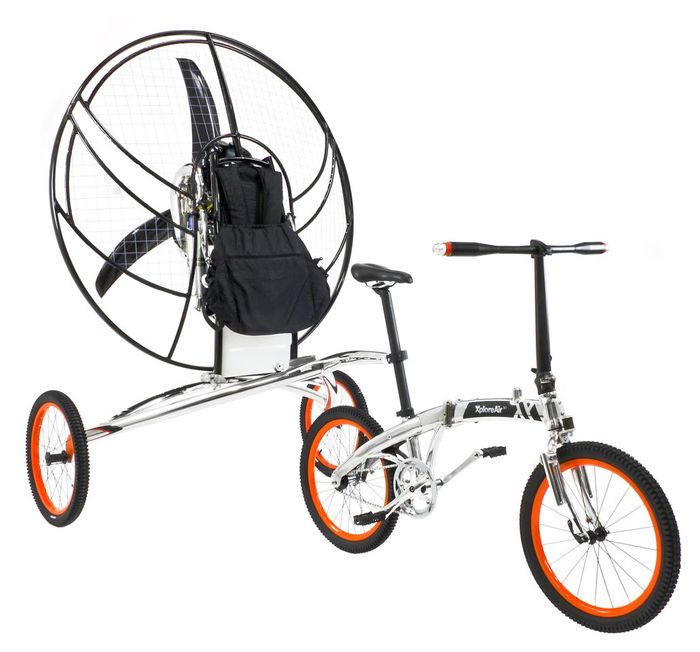 The is aimed at those who have a thirst for adventure, but are without, perhaps, the storage space or bank balance to accommodate a helicopter.

As well suited to someone living in London as Mojave, we believe the

At the heart of the design is a bicycle that tows a lightweight trailer carrying a powerful fan.

The lightweight design folds to a size small enough to carry into a house or apartment for storage.

In order to fly, the bike docks with its trailer, a flexible wing is unfurled and an electric starter motor fires up the biofuel-powered fan.

Once airborne, the flies at speeds of 25mph for up to three hours at a time. It can take-off from any open ground clear of obstructions – a football pitch-sized area is ideal.

Use the bicycle on its own as you would any other bike. Fold it up to store or carry on the bus, train or metro.

The bike docks with its air frame trailer to form a para-trike configuration for optimum expedition autonomy. In this set-up you can carry all the equipment you need to ride, fly and camp.

Alternatively, detach the bike and air frame trailer and wear the powerful fan on your back for a foot launch. This set-up gives improved performance in the air and allows for take off in higher and changeable wind conditions. In most territories, no licence required to fly in this configuration.

Use the optional tent to fly / camp – we call it flamping. Ride your bike out of the city, fly, pitch your tent. Detach the bike to explore or fetch supplies.

Inspired by our own love of life under canvas, we’re developing a tent designed specifically for the . Every camping trip is special, but the freedom to cycle out of town, take to the skies, and sleep out before finally returning home opens a world of possibilities.

So, help us christen the pursuit of flamping (flying and camping)

Carried inside an integral pannier set, our lightweight XploreAir tent will use the motor cage as a structural element to keep you and your kit dry until you take to the sky again. The tent design includes a separation panel between the sleeping space and the trailer/bike compartment.

The purchase and running costs of the are comparable with a small family car and no other aircraft offers such flexibility for city dwellers; the bicycle is small enough to be taken on the metro and the entire vehicle can carried up stairs to be stored in the hallway of a flat.

As well as city commuters looking for weekend adventure, the flying bicycle has application as a highly autonomous and cost-effective aerial reconnaissance vehicle for forest rangers and border patrols etc.

We live in Kingston-upon-Thames, on the outskirts of London, two minutes’ walk from the birthplace of the Sopwith Aviation Company – a British aircraft company that built aircraft including the Sopwith Camel for the Royal Air Force in WW1.

We spent our childhoods riding bikes and dreaming of flight.

Enchanted by the connection between cycling and the birth of powered flight – the Wright brothers were former bicycle mechanics – we designed the to recapture that pioneering era.

We formed XploreAir to give birth to the and other equally-unusual projects planned for the future. As a project backer you’ll get to know us better through regular updates and sneak previews.

Designed and built in Britain