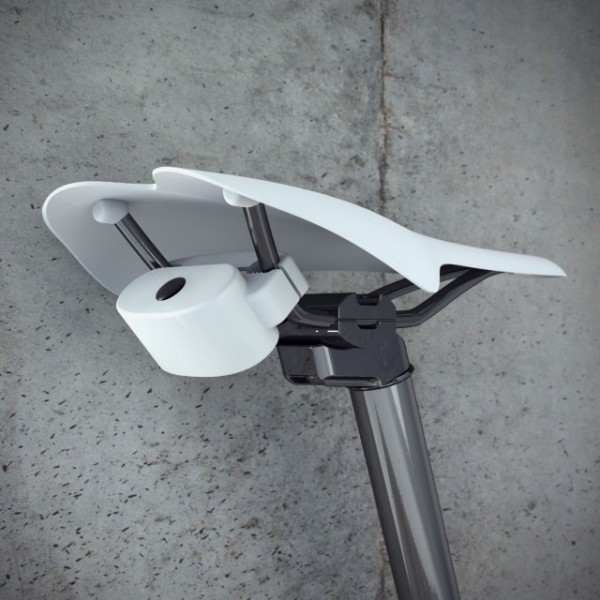 Very little surpasses a sturdy U-lock for securing one’s bike. However,  in times when  there’s nothing available to secure your bike to, no one likes to leave his or her bike completely vulnerable to theft.  No worries, designer Dennis Siegel has devised a solution.

The RFID Bikealarm attaches to your saddle and emits a 120dB alarm when it senses movement (i.e. someone tampering with your bike).

"The RFID Bikealarm is meant to be a useful add-on to mechanical bicycle locks because it massively extends the range of protection with only a few components," Siegel explains on his website. "It is low-cost, durable and easy to use."

The Bikealarm was designed as part of Siegel’s Bachelor degree thesis at the University of the Arts Bremen in Germany. The final outcome is a prototype that aims to ward-off any would-be thieves the moment they attempt  to interfere with the bike.

The device is able to distinguish between ambient vibrations or fluctuations and more focused movement.

"I used a micro-power omni-directional vibration sensor that is connected to a microcontroller," Siegel tells Gizmag. "It continuously senses the environment to distinguish between specific events, for instance a passing tram and a serious theft."

Siegel created a working model of an alarm that would sound when it sensed movement, but wasn’t initially sure how it would be best attached to a bike.

"I decided to mount it to the rails of the bike saddle because it allows for comfortable interaction and the position is less conspicuous as it looks like a small repair kit," he said.

Siegel opted to use RFID technology rather than Bluetooth to keep the costs down. The alarm is activated by holding an RFID tag close to the device until an audioacknowledgement is sounded. Likewise, the device can be switched off using the same method when the user returns to their bike. Siegel explains that the most difficult aspect of creating the alarm was to get the electronic circuit down to a small enough size.

The prototype runs off an internal lipoly battery that can be charged by USB within 2 hours and lasts for a few days with normal use. As the device is only at development stage, this could change should it be rolled out commercially. But, according to Siegel, there are no agreements in place to do so as yet.

The video below shows a demonstration of the RFID Bikealarm in use.