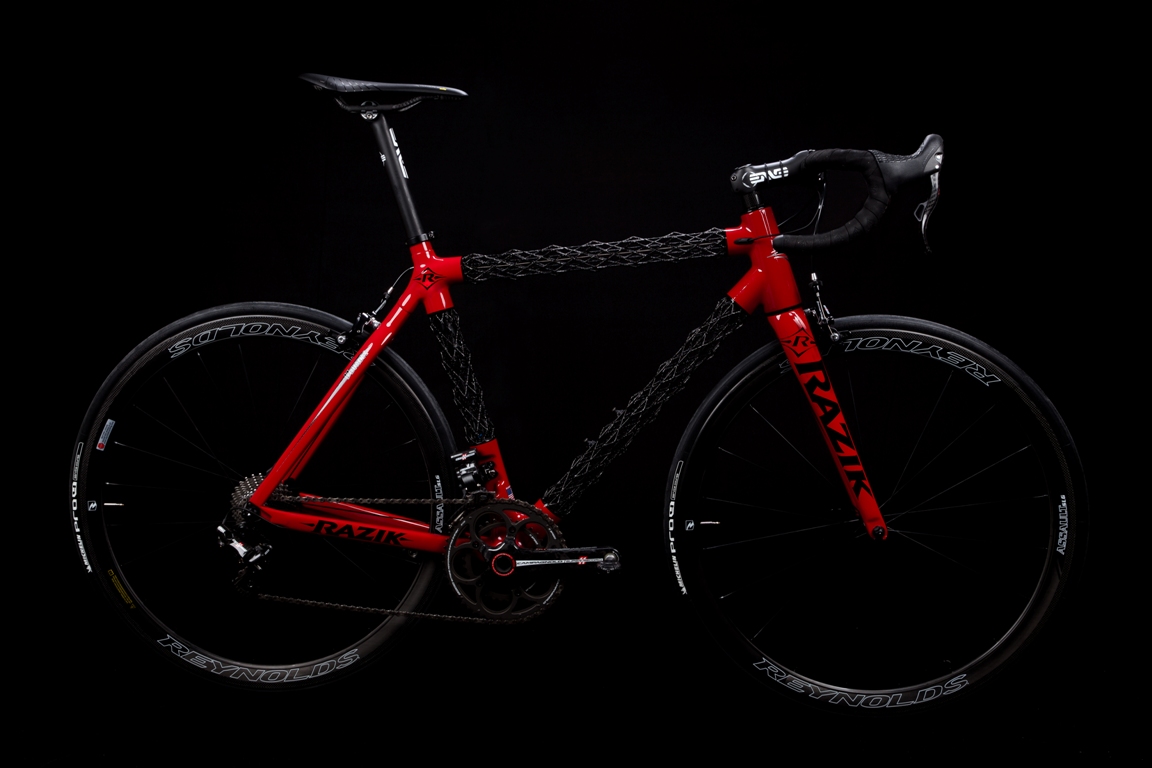 Razik acquired the patents to the design, after it’s predecessor lost the rights. The new company claims to have completely redesigned the IsoTruss frame inside and out, along with additional design patents in the works.

Given the name Vortex, the new frame incorporates  "tubes" that feature an open lattice structure of carbon fiber and kevlar strands, which are intricately wrapped by hand, as compared to molded sheets of carbon fiber.

“The unique capabilities of the IsoTruss® design allows us to tailor the properties of each characteristic of the ride,” explains Ryun Noble, president and director of engineering at Razik. “What’s truly astounding is its ability to absorb energy-robbing vibration while maintaining strength and rigidity to transfer power and deliver precise, razor-sharp handling all in an incredibly light frame.”

Previously, the Delta 7 frame sold for nearly $9,000. However, improvements is production costs have helped Razik to lower the price of the Vortex to a reachable $3,999 – with complete bikes equipped with Shimano Ultegra components starting at $5,799.

“Vortex is just the beginning,” says Philip Boyack, direcrtor of sales and marketing at Razik. “Later this year we will offer hardtail and full-suspension mountain bikes. Both of these bikes feature several design innovations such as the capability to interchange 29, 27.5, or 26 inch wheels on the same frame, a revolutionary suspension system, as well as other patent-pending advancements.”

A team passionate about bicycle design and technology, Razik has created the next step in a long line of bicycles refined for generations and perfected over time; the next step in bicycle evolution. This new bicycle design is extremely light and strong. The IsoTruss® carbon fiber bike frame is very solid and rigid allowing for a more responsive bike with a greater power transfer to the wheel with less energy loss. The carbon composite materials with a spider web-like open design allow for vibration dispersion throughout the bike for a very smooth ride. This unique design is an ideal combination of art and engineering.

No direct transfer for the vibration to travel. As a vibration extends it hits a “node” and splits into to three other members, till it hits the next node and is split again, and again and again till the vibration is dissipated.

Proudly incorporating the benefits of IsoTruss® technology in the biking world.

The most responsive, best handling, most comfortable and fastest all-around

ride you will ever own.