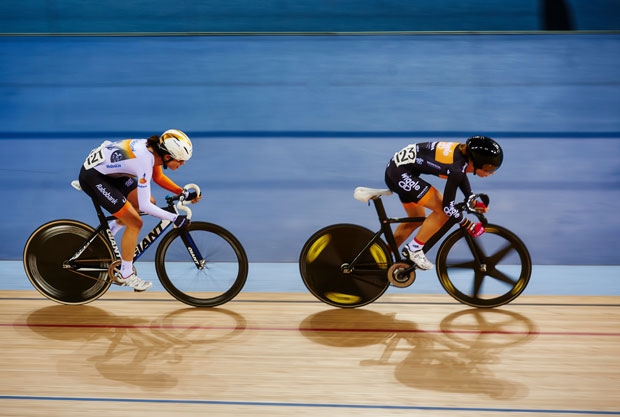 Round one of this year’s Revolution Cycling series, gave fans hundreds of reasons to get on their feet and cheer on the global stars that took to Lee Valley Velodrome. There was a scintillating variety of events that characterizes the Revolution Track Series; Varsity 4k team pursuits, the Madison National Championships and the opening two events of the Women’s Omnium topped the bill.

The evening started with the Varsity Team Pursuit heats with Glasgow Uni and Loughborough making it through to the final as Southampton double faulted, relegating them to the bronze race with Lancaster Uni.

Juan Peralta and Lewis Oliva won their heats in similar style in the Keirin, leading from the front with too much power for anyone to come round.

Laura Trott sent a clear message to Marianne Vos in the Women’s Omnium Scratch Race, Laura’s team mate Elinor Barker helped to pin Vos on the sprinter’s line in a perfectly timed tactical move. By the time a gap opened for Vos, Trott crossed the finish line and the crowd erupted. The two top seeds went head to head in the 3k pursuit later in the evening, Trott was merciless in her effort and if the event had gone on for another lap Trott would have made the catch.

Andy Tennant and Ollie Wood were crowned National Madison Champions with a convincing win over pre-race favourites Alex Dowsett and Joe Holt. Tennant and Wood made the right moves at the right times while Dowsett’s powerful surges were closely marked throughout the 200 laps. The sprints that Dowsett and Holt won were sandwiched between Tennant’s and Wood’s, and the race was won before the final sprint.

Loughborough University won the Varsity Team Pursuit challenge beating Glasgow in the final. The last 5 laps were extremely close as the lead changed between the teams, the cheering grew louder and Loughborough made the most of it, winning by 0.5 seconds. In the 3-4 match Southampton Uni asked what could have been as they beat Lancaster Uni by 4 seconds.

Juan Peralta employed the same tactics he used in the Keirin heats for the final and as the bell sounded it looked like he might have a repeat result, but Lewis Oliva kicked hard on the back straight, distancing the bunch to take 1st place.

The best race of the night was saved for last. The Omnium elimination race gave Vos the opportunity to use her bunch racing skills to her advantage however Laura Trott called her bluff as the pair were the only two on the track for the final lap. The noise in the velodrome must have reminded Laura of London 2012, as she threw herself down the banking of the track with 200 metres to go, she stayed out of the saddle until the final twenty metres as Vos couldn’t match her sheer power.