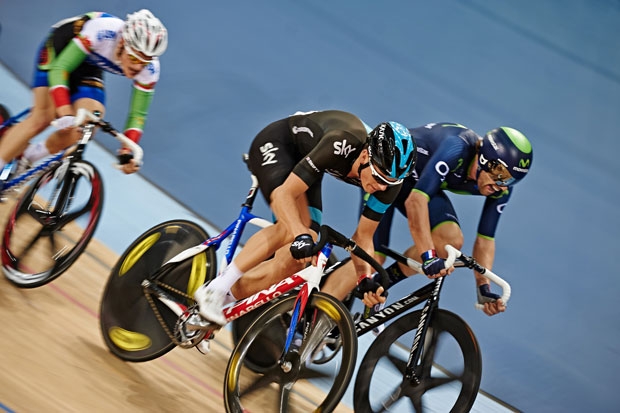 The Saturday afternoon session of Revolution Series Round 1 featured Laura Trott and Marianne Vos going head to head for the fourth and fifth time this weekend, as well as Wim Stroetinga outsmarting Ben Swift and Alex Dowsett in a tense Elite Point Race Championship.

The afternoon started with the qualification for the Men’s Sprint, Lewis Oliva returned to the track after last night’s thrilling Keirin win, and posted the fastest time by 0.2 seconds over Juan Peralta.

The Elite Championship Flying Lap kept the pace up throughout the next event. Orica-GreenEDGE’s Scott Sunderland stayed pinned to the black line and saw off fierce competition from the likes of Ian Stannard and Alex Dowsett to win the 250 meter sprint in a speedy time of 13.195.

The National Madison Championships were also held this afternoon for both the youth girls and boys. The competitors all displayed flawless changeovers, which made both events closely contested. Eleanor Dickinson and Jessica Roberts claimed the GB title with a lead of 6 points. In the boys, Ethan Hayter and Fred Wright managed to stay in control and catch frequent attacks and won with a lead of 7.

The Revolution Longest Lap had it’s first professional incarnation at Revolution 46. Ben Swift and Adam Blythe were the big names who held their track stand until the gun. Swift performed his best impression of a statue for two minutes as Blythe crept up towards the line. Blythe’s all-or-nothing approach paid off as he flew round the track, raising a triumphant fist when he crossed the line.

Laura Trott continued her dominance in the Omnium, winning both the 500 metre time trial and the flying lap. Trott’s determination was evident when the bell sounded in both events, with the bike surging forward under each pedal stroke. Vos could only manage a 5 th and a 6th which means Trott is going to be in an extremely good position for the final points race. Vos will have to ride a perfect race if she wants to snatch the win from Trott, it’s a big task but if anyone can do it, Vos can.

In the Elite Championship Points Race, Alex Dowsett put in an unbelievable turn of speed to win the first two 10-lap sprints, each time distancing the bunch by 50 metres in less than ten seconds, however as he recovered from the second effort Ben Swift, Wim Stroetinga and a few others attacked and split the main group, eventually gaining a lap despite Dowsett leading the bunch. Stroetinga attacked again with 15 laps to go in a brazen solo attack, Swift and Andy Tennant tried to energise the main field but the crowd carried Stroetinga on to the back of the group, giving him another twenty points. The crowd went wild for the final sprint as Stroetinga beat Swift by half a wheel to take the overall win.