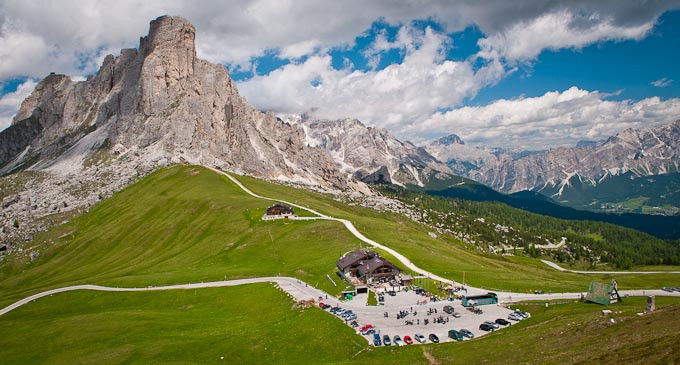 From the Col Collective

I guess it was only a matter of time before we’d awaken to a tearful sky, up until this point we’d definitely had lady luck on our side. Conditions can change in a heartbeat so I was hoping that the clouds would roll on by just as quickly as they’d descended on the Passo Giau. The Dolomites on a blue sky day are one of my favourite places to chase an endless horizon and escape the day, and are a place like no other on the planet. Sinuous roads, jagged peaks and steep gradients leave you breathless for all the right reasons but, hey, the show must go on right? It’s not over until we’re singing at the summit…..at least that’s what the voice in my head keeps telling me.

The Giau may not be the longest climb at 10km but it should never be taken lightly, with a gradient that rarely drops below double figures all the way up to 2,236 metres it’s a serious test.

I was absolutely gutted not to be able to unlock all of the secrets of the climb on this day, however, despite the somewhat sombre conditions the Giau gifted us one of the most humbling experiences I’ve ever had in the mountains, and my life for that matter. We’d seen many shepherds, albeit from afar, during our filming which subsequently led to frequent late night discussions and head scratching en route to the next climb trying to work out how their life actually works. To spend just a few moments in the presence of a shepherd and to witness how they are the true master of the mountain and their flock absolutely blew my mind. Living on the road, continually walking their sheep all year around from the Dolomites in the summer to the flatlands of Slovenia in the winter put everything in perspective and made me realise in that same heartbeat that makes the weather change not to overlook the real beauty of our surrounds. Take your time, seize the day and don’t let the moment pass you by.

Thank you to the Giau and that special shepherd for taking us out of the bubble and back towards life once more. Peace.