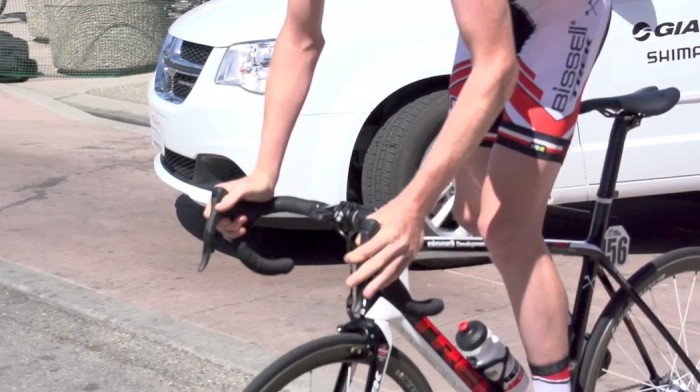 Excitement and enthusiasm continues to abound the cycling world, after SRAM’s "skunkworks", fully wireless groupset was spotted during this year’s Tour of California onboard Bissell Development Team’s bikes.

However, according to information that SRAM shared with an online cycling publication, they said "don’t hold your breath", with regard to availability being anytime soon. In fact, the brand suggested that the wireless groupset was still at least two years away from production. To wit:

“Yes, the technology is wireless.

“This product technology is still in a long development phase with much testing and refinement yet to occur.

“As soon as we develop commercialization plans, we will provide an update.”

Curiously however, the UCI’s technical rules stipulate that prototype equipment can’t be used in a race, unless said product is going to become available for sale within a nine month period from the date of use.

This raises the following possibilities:

1. Team Bissell didn’t actually use the wireless groupset during the race, and SRAM merely seized the opportunity to "tease" observant onlookers during such a high profile event.

2. A lack of enforcement on the part of the UCI during their own sanctioned event ?

3. Or, perhaps SRAM is trying to throw everyone off it’s tracks, with plans of putting the groupset into production sooner than the brand is willing to admit to at this point ?

If you ask me, two years is a long time for SRAM to sit back and watch Shimano and Campagnolo beat them to the punch.  And, they surely will – if that’s the case.  😉