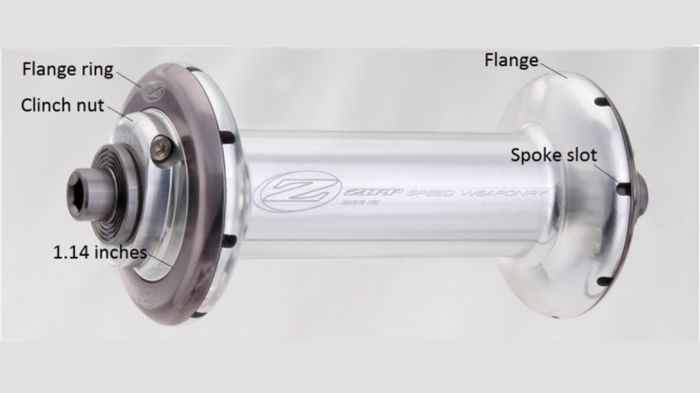 Zipp is working with the CPSC to recall some first-generation model 88 front hubs because of a concern about a retaining ring that can fail, resulting in "an ejection" of all the wheel’s spokes. The relevant hubs were manufactured between 2008 and 2010.

About 12,000 hubs are being recalled. The company said two incidents of collapsed front wheels have been reported. Each resulted in stitches, bruises and lacerations, plus a concussion in one case. Wheels with the hubs were sold in the aftermarket and included as original equipment on bikes from five brands (see list below).

Zipp says there are some simple visual checks to identify whether a hub is first generation; hubs not affected by this recall have larger clinch nuts that prevent spoke ejection.

Affected hubs have a retaining ring and clinch nut that look like those shown in Image 1.  Note the larger colored ring with the "Z" and the smaller, silver-colored clinch nut. Zipp said no other generation of the hub had the Z logo on the retaining rings.

Zipp is telling owners of wheels with the affected hub to not ride with the wheel until they have taken the wheel to a dealer for an exchange. The company said most consumers can have their hubs rebuilt with new parts at no cost.

More information on the recall is in the pdf attached to this article. Consumers who cannot reach their dealer or who have additional questions can call SRAM’s Dealer and Customer Service directly during regular business hours at (800) 346-2928 or (800) 231-6755.

Bikes spec’d with the recalled hubs: