Second Addition of the Arctic Race of Norway Planned 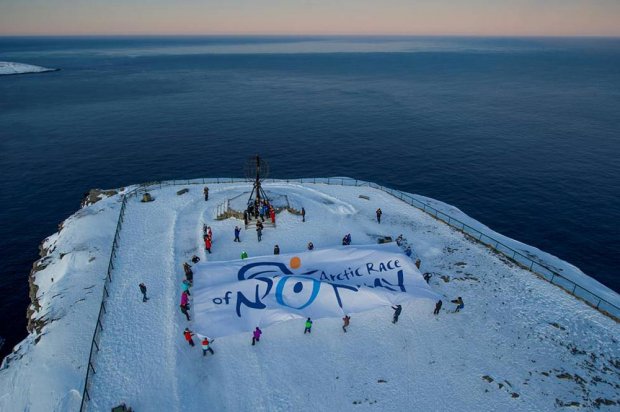 The extraordinary popular and media success of the inaugural Arctic Race of Norway has moved the bar up a few notches, to the level of Norwegian explorer Roald Amundsen, who is revered wherever nature takes on a majestic scale: the finish of the first stage in the North Cape on August 14!

Dag-Otto Lauritzen, the first Norwegian Tour de France stage winner (Luz Ardiden, 1987) and a celebrity in his country’s cycling scene thanks to his commentary on TV2 Norway, was on hand as representatives of the Northern Norway regions (Nordland, Troms and Finnmark), the Honningsvåg and Tromsø municipalities, of Arctic Sport AS, and Amaury Sport Organisation all came to North Cape on January 28 to symbolically plant the Arctic Race of Norway flag at the foot of the landmark’s monument. It is here that the opening stage of the 2014 edition will finish on August 14, before the race continues on to Tromsø, the largest city in the north of the country and terminus of the event on August 17.

This edition of the ARN will be a four-day stage race, same as last year’s. Much to the delight of riders and TV viewers alike, the northernmost cycling race ever held to date will once again take place after the Tour de France, which will have set off from its northernmost start ever, in Yorkshire (Britain), a month and a half earlier.

"We are proud to use cycling to display the stunning beauty of the landscapes in Norway’s far north", said a cheerful Jean-Etienne Amaury. "Professional cyclists see this one-of-a-kind race as something of an adventure."

"I’m thrilled by this adventure in such a remarkable place as North Cape", insisted the race ambassador and winner of last year’s inaugural Arctic Race of Norway, Thor Hushovd. "It’s so far north that, even for a Norwegian like me, it seems crazy to think that a cycling race can be held here. I could’ve never imagined it. I really hope I can defend my title by taking part in the second edition too. We want to repeat the success of the first one! The local folk, sport fans, organisers, sponsors… They’ve all thrown their weight behind this new race from the beginning, hoping it will be successful and long-lived. I think this edition will be even better and have an even greater impact."

In 2013, the first edition of the Arctic Race of Norway, which has the support of all the regions in Northern Norway (Finnmark, Nordland and Troms), attracted 150,000 spectators (despite the area crossed having only 125,000 inhabitants) and was broadcast in 110 countries, with 74 hours’ worth of dedicated TV programmes. The exact route of the second edition will be revealed at a press conference held in Oslo in May, once the snow has melted and the final technical reconnoitring has taken place.