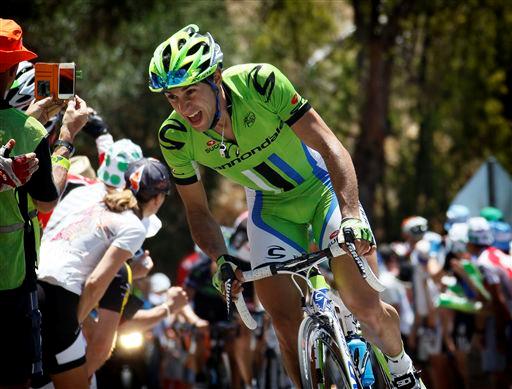 Following his suspension by the UCI for testing positive for the banned substance Clostebol back in August 2013, and his subsequent termination by Team Cannondale, Stefano Agostini issued a letter of condemnation to the UCI Anti-Doping Commission’s coordinator – Leroux Dominique this week.

The 25-year old Italian rider claims that the minute amount (0.7 nanograms) of Clostebol that was found in his test was present in a rash cream he was prescribed, for which he claims was  disclosed at the time of his test. Agostini also states in his letter that he will not dispute the 15-month suspension, but will leave the sport “with dignity, knowing that I never cheated and I conquered all my results with dedication and sacrifice, well aware that this absurd story has also caused considerable damage to my image.”

To the attention of Mr. Leroux Dominique

I want to clarify that my acceptance of the sanction is to be understood as a declaration of capitulation:

I give up to a system that has decided that at age 25 I should stop being a professional cyclist.

I think the sanction you have decided for me is not right and I do not feel at all belong to me since I have never made use of performance-enhancing drugs.

My biological passport is impeccable, the different and multiple blood tests can not be faulted.

It is just that the emeritus laboratory in Cologne has detected the presence of 0.7 billionths of a gram in my urine of a substance called Clostebol, the active ingredient of the ointment Trofodermin that I myself had declared at the time of the test and that I had been regularly prescribed by a doctor to treat a rash.

The laboratory has reported, in infinitesimal extent, what I had said in perfect good faith. If I had not declared it probably now I would not be in this paradoxical situation because it would not even been found. This will remain a strong and unresolved question in my mind.

Everybody knows that you can’t dope with an ointment, for more prescribed by your doctor, and sold in any pharmacy or drugstore, even without medical prescription.

Well after 7 long months of suspension, explanations of the factual circumstances of the case, requests of additional information with maturities of short and peremptory time, of grueling waiting for some kind of feedback from you (which came systematically after weeks by my questioning), wear and tear and stress mixed with apprehension … the esteemed UCI, despite having a very clear situation documented beyond any doubt, decided to treat me in such a way besides significantly more severe than other athletes “stumbled” into Trofodermin, even the same way as who does and has done in the past use of EPO, cocaine, blood transfusions, or manipulations of his own blood, proposing a 15-month ban, in addition to the payment of the expenses incurred by you, which is almost like a bad joke.

If your conclusion is to impose me a disqualification undoubtedly excessive, what is most striking are the reasons for this choice. The documentation produced by me duly in your terms proved the truthfulness of my version and then my honesty, the UCI itself has recognized the use of Trofodermin cream for a therapeutic purpose, motivated by a medical prescription, but this explanation and justification was not enough, given the imputation of liability.

This is the process culmination of sanction acceptance that you proposed me months ago, with the stated purpose of speeding up the decision and avoid a trial and related expenses. Obviously none of this has happened and the conclusion then is grotesque.

The alternative that I have is the transmission of the dossier to the Italian Cycling Federation with the steering of the process, the outcome of which will have to confirm the authority deciding the 15-month disqualification otherwise the UCI itself, as already stated candidly in a veiled blackmail tone, will recourse to CAS in Lausanne; for myself this would obviously mean conducting counter and expertise, contribution to a legal defense of the mandate as well as the appointment of arbitrators for a total cost of around 30-35,000 Euros that I don’t have.

I dare say, in the light of the absurd conclusion of this case, that the UCI Anti-Doping “network” has undoubtedly some malfunction since it does not make a distinction with regard to who gets stuck there, even in the light of the circumstances that are certainly worth to distinguish one case from another, as mine and the one of a “real” drug-taking in order to alter performance and distort the results.

Reiterating then as the end of my cycling career due exclusively to 0.7 nanograms (0.000000007 g) Clostebol coming, for your same recognition, as an ointment used once in order to cure, under medical advice, a demonstrated disease, I would like to add that from this vicissitude a deep and intractable disillusionment in the values of honesty, justice, and equality in the sense of treating equal situations and different situations in different ways remain me.

I leave professional cycling with dignity, knowing that I never cheated and I conquered all my results with dedication and sacrifice, well aware that this absurd story has also caused considerable damage to my image.

Finally, I think that this story, which has ruined my career and destroyed my dreams, will also undermine the credibility, usefulness, and infallibility of your doping control system.