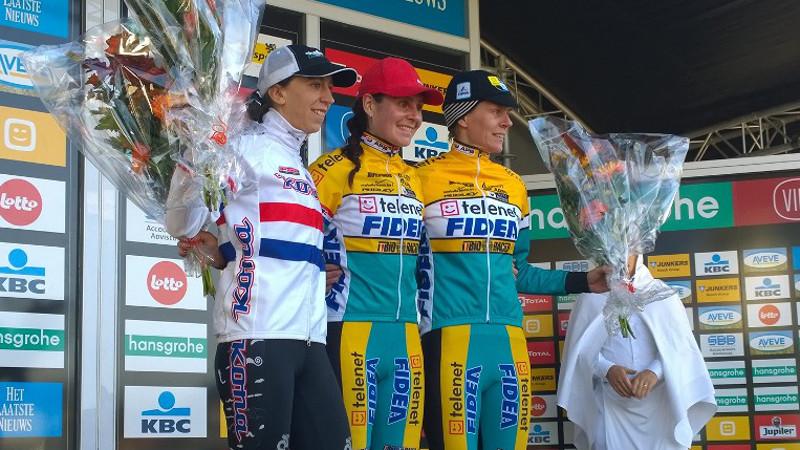 Nikki Harris (Young Telenet-Fidea) won the fifth round of the Superprestige cyclocross series in Spa-Francorchamps today, giving the British rider her first win of the season.

“I’ve been trying so hard the last few weeks. Sometimes I had a little bit of bad luck but everybody has some bad luck,” Harris told Sport.be. “Today was a good day. I was in pain right from the start but I was pushing and pushing. I’m really happy with the win” said Harris.

However, things did not go so well for Sanne Cant (Enertherm-BKCP), who ended her six-race long winning streak in Francorchamps, after abandoning the race with back problems – with just one more lap to go.

Harris was out front for the start of today’s race, with Cant and Wyman keeping a close eye  on her.

However, when Wyman missed a downhill corner in the first lap, Cant proceeded to join Harris – leaving the British rider behind in a chase group consisting of Martina Mikulaskova, Pavla Havlikova, Ellen Van Loy and Jolien  Verschueren.

However, as the race entered into the second lap, Cant was dropped by Harris. From there, Harris created a comfortable lead, while Verschueren and Wyman succeeded to bridge  themselves up to Cant.

In the second half of the race, Van Loy managed to surge forward – subsequently taking over Verschueren’s spot in the chase group.

Harris ultimately brought home the win, while Van Loy’s hopes to claim second place faded when she was forced to switch bikes due to a mechanical problem.

At that point, Wyman seized the opportunity to ride ahead and secure herself second spot on the podium.

“It’s a very hard course where the strongest riders come afloat anyway. You need some luck too because the rocky subsoil and several small stones can always cause damage,” Van Loy said.

In the meantime, Verschueren finished in fourth place, ahead of Mikulaskova and Havlikova.