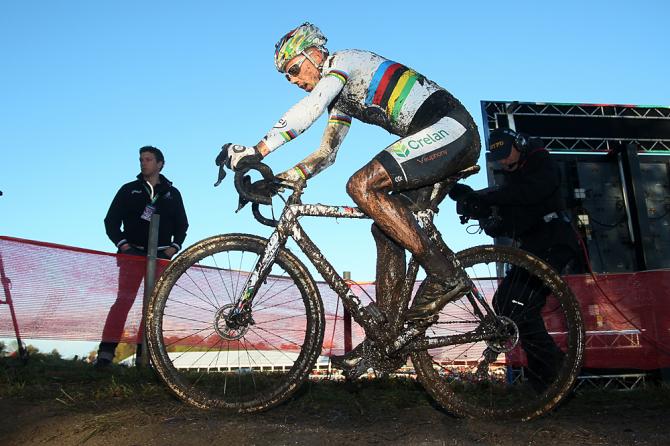 Sven Nys rode his first ever cyclocross event yesterday with a bike equipped with disc brakes.

The Belgian cyclocross star, switched back and forth between bikes that were equipped with both cantilever and disc brake set-ups during yesterday’s Hamme-Zogge Superprestige event.

"The difference is massive. With disc brakes you are braking, instead of slowing down," Nys said, adding that there are some disadvantages, too – namely weight. While ‘cross doesn’t incorporate the massive climbs of road racing, the frequent accelerations and run-ups mean that riders arguably feel any extra mass even more.

"The difference is about two bottles of water, and it’s not all in the brakes," Nys said. "It’s an adapted frame which is strengthened. It’s too much. Too much to run up a climb with that bike on your back."

The Hamme-Zogge course doesn’t feature much in terms of elevation, however, next week’s race in Asper-Gavere will prove to be more decisive.

"In Gavere it will be crucial. Normally there’s not a lot of running," Nys said.