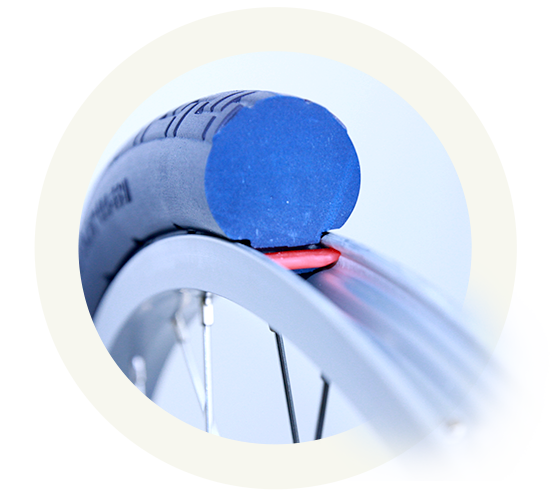 You’ve heard the cliche, "let’s not reinvent the wheel", well one company is making a solid attempt to reinvent the tire – literally.

Indeed, the little-known Korean brand, Tannus, has launched a new series of tires that hope to challenge the stolid and staid tire and tube combination with a bold, new solid rubber design.

According to Tannus, what little increase in rolling resistance might the attributed to its solid design, their tires can last up to 6000 miles. In some cases, that can be as much as 4 times the life-span of a traditional tire.

While there have been attempts to bring a viable solid tire design in the past, the concept has yet to be embraced by the cycling masses – and certainly not by serious enthusiasts.

The person behind the development of the new Tannus tires, is Jazz Walia, who says, “Commuters can leave their house on their bike, safe in the knowledge that they will not get a puncture. Riders don’t have to worry about reliability. They never have to worry about getting to work late, changing a punctured inner tube in the freezing weather or worrying about what time they will get home on their bike. They don’t need the fuss of pump, spare inner tubes or tire levers.”

Tannus offers two models in its new Aither tire series, the 1.0 which is aimed toward the commuter/urban cyclists segment, and the 1.1, which is designed to attract the serious road cyclist.

Both models are made from a nanofoam polymer, which has a density that’s consistent with a traditional tire inflated to 100 psi. Moreover, their able to withstand temperatures of -15º to + 50º.

In the past, the downfall to solid tire designs, has been the significant increase on rolling resistance. However, according to Tannus, their unique polymer material results in a minimal 2% increase in rolling resistance over traditional tires. In fact, Tannus says, that tests against a traditional tire, revealed, their Aither 1.1 can travel within 1 mph of a standard tire and tube set-up.

The Aither tires can be fitted to most clincher rims, via a series of slots and plastic strips, which in turn lock into the groove of the rim where a regular tire normally sits.

Tannus is hopping their solid tire technology will catch on, and everyone from daily commuters to the avid "roadies" will embrace the concept.