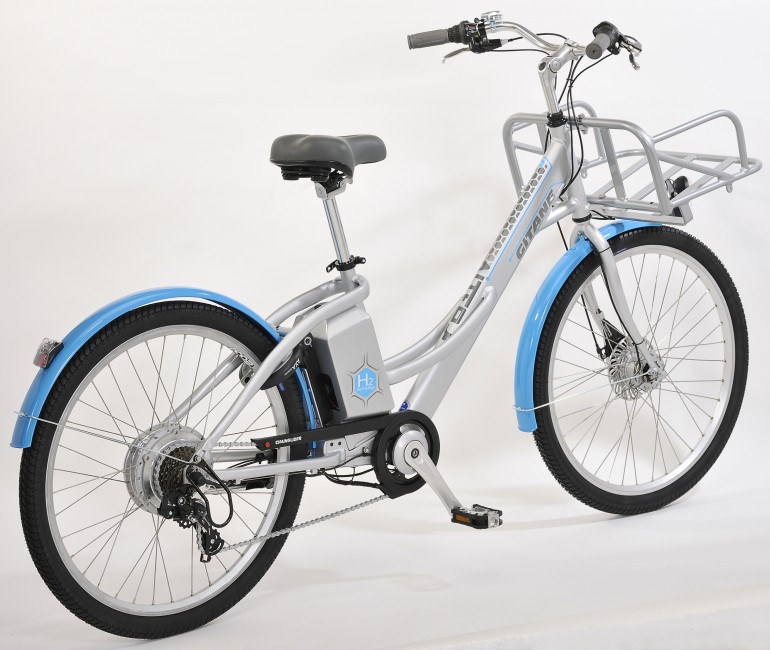 The hydrogen fuel cell is arguably better suited to the e-bike than it is to the car, at least at the moment. It’s not practical to carry around a spare tank of hydrogen in a car, and hydrogen fueling stations remain few and far between. On a bike, however, it’s entirely possible to carry extra fuel cartridges, increasing the range with each one.

Unlike a traditional battery-powered e-bike, which offers a finite range, the Alter’s range is only limited by how many hydrogen refills you can carry and/or purchase along your ride. Its designers envision riders planning out ride distances and carrying a specific number of cartridges based on those distances. Judging by the photos and video below, it will be easy enough to carry multiple cartridges in a backpack and/or bike bag.

The Alter Bike is a collaborative project between three French partners. Cycleurope is a bicycle designer, manufacturer and distributor that owns nearly a dozen bike brands, including Bianchi and Gitane, the latter of which will be Alter Bike’s brand. Pragma Industries specializes in hydrogen fuel cell technology, and Ventec designs battery management systems.

These partners have worked together to adapt existing technologies and develop new solutions for the specific application of a fuel cell bike. Their efforts have included creating a new breed of hydrogen fuel cells, storing hydrogen in recyclable canisters and designing electrical architecture specifically for the fuel cell bike.

The partners revealed the Alter Bike in France earlier this year but don’t seem to have detailed specifics such as battery size, weight or range on a single cartridge. We’ll have to wait until closer to launch, which is planned for next year for fleet customers and 2016 for consumers.