The Spiran Bicycle by People People 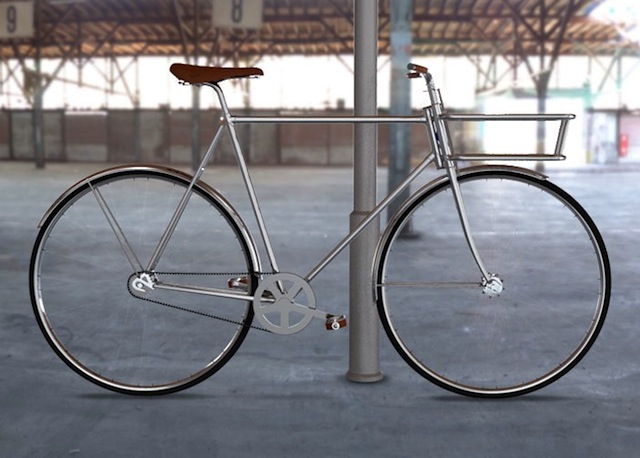 For many years the Kronan bike have been appreciated by many swedes for its simple, robust and clever design. Kronan is designed like the traditional swedish military bikes, which means it automatically is something all swedes can relate to and appreciate. We at People People love this bike, but we also think it’s a bit heavy and clumsy for a modern city contexts. Therefore we decided to design a successor. We call it “Spiran” which is sort of the sleeker and younger sibling of Kronan that moved into the city. The name Kronan is swedish for “Crown”, and Spiran means “Scepter”.

Just like Kronan takes inspiration from an old classic, we decided to take inspiration from old swedish post and delivery bikes. This is partly because it is a heritage of simple robustness, but also because the need of transporting things on your bike remains very important in a modern city context.

The move from the old countryside to the city also requires an adaption to the streets. We have combined a robust construction with a sleek, light weight frame and slim racing tires, optimized for the agility and speed needed in a city. In everything from the frame to the leather details, we wanted to use only genuine materials that not only last a long time, but also ages with grace.

Another issue we wanted to solve was the problem with bike locks. People need to buy a separate, expensive and often clumsy bike lock or chain in order to not get their bikes stolen, and then find a way to bring it with them along on their ride somehow. Many people have the locks just dangling from the handlebar, some carry chains over their shoulders, and others have to put a many times dirty lock into their bags. We want to get rid of this clumsiness! We have designed an integrated bike lock that folds out from the front basket, locking the bike in the front wheel or even around a city lamp post, fence or similar. The old Kronan bikes offered a clever detail in the shape of a bike pump compartment, with this solution we wanted to continue this heritage.

We can also learn a lot from bike messengers who often choose fixed gear bikes for an efficient, robust and stripped down approach. A lot of gears will add both weight, complexity and a higher demand for maintenance. We decided to go for a single speed approach, with a carbon fibre belt in stead of chain. This belt drive does not need any lubrication or maintenance, which means city bikers will keep their trousers free from grease. Its simple, clever and robust, while also offering a smoother and quieter ride.

We like to promote bike riding in general as a great way to get around in a city. Both you, the city and the planet get in better shape! This bike would also be taken care of in terms of ecological material sourcing, long lasting construction and repairability.