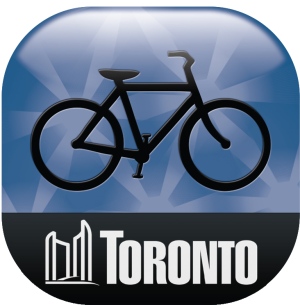 The app tracks a cyclist’s path around the city — giving the cyclist data about his or her bike route, average speed, distance and the greenhouse gases offsets, and at the same time giving the city data about where people bike ride.

The data is then submitted anonymously to a database maintained by city staff. Cyclist’s information will be collected, analyzed, and incorporated into the city’s plan to expand upon existing cycling networks, slated for release to council sometime in 2015.

No data can be sent without explicit permission from the app user, the city said.

The information collected by the app will “assist in determining high demand corridors used by cyclists, identifying neighbourhood links and getting a better sense of how cyclists adapt to changes to cycling infrastructure over time,” it said in a statement on the City of Toronto’s website.

“The data will also assist the city in monitoring cycling patterns over time as cycling infrastructure is evaluated, improved and expanded."

The software was developed by a company called Brisk Synergies, and is available for free download on iPhone and Android.

The release of the new app comes as debate over expanding dedicated bike lanes throughout downtown Toronto heats up. Earlier this month, the city’s public works committee forwarded plans for a bike lanes project to council, who will vote on the proposal later this month.

Download the Toronto Cycling App for Android or iPhone.