Tour Down Under 2015 People's Choice Classic 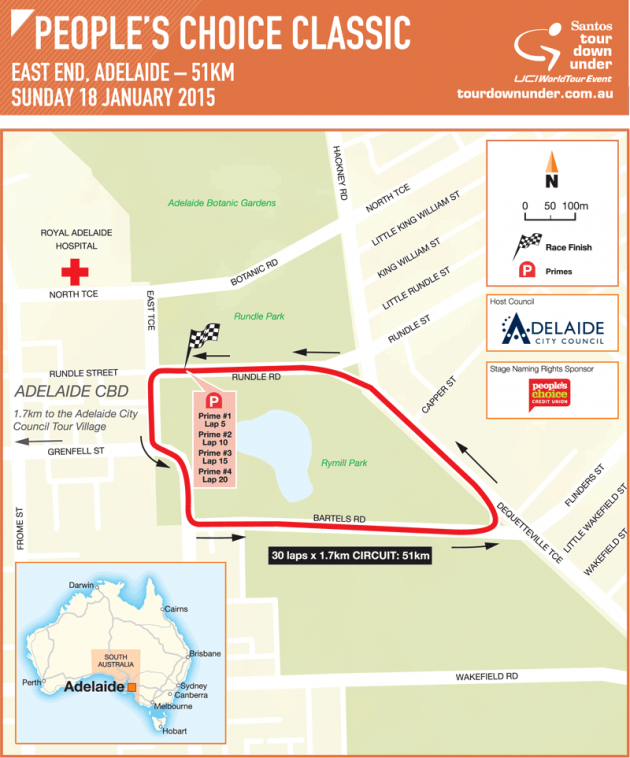 The People’s Choice Classic kicked off a week of world class cycling action in Adelaide with German sprint sensation Marcel Kittel taking honours at the end of the 51km, 30 lap race.

The Giant-Alpecin team rider, who won last year’s Classic but on a different course, set himself perfectly for the sprint powering home to win in a time of 1:02:41. Spain’s Juan Jose Lobato Del Valle (Movistar) was half a wheel behind in second with Dutchman Wouter Wippert (Drapac) third.

“It’s actually almost impossible to control the bunch in such a short race but my team mates did an awesome job,” said Kittel.  “In the chaos I got a good lead out.

“This is my third time in South Australia and I really like this place,” he said. “I like it even more when I win like today.”

Before the action got underway Evans, rode to the front of the start line escorted by the 30 other Australians in the race as the strains of Advance Australia Fair rang out across the city, a fitting tribute to the rider who has achieved so much in his 20 year cycling career.

Once the racing started the pace was on as the opportunists attacked in a bid to pick up prize money in the four intermediate sprints. The Subaru sprint at the end of five laps was won by track world champion and recently crowned Australian Under 23 road champion Miles Scotson (UniSA-Australia).

“I was staying near the front and I had the legs fresh from the start so I had the feeling I could get away and win the first sprint,” said Scotson who celebrated his 21st birthday today.

By the time the Europcar Sprint came around at the end of lap 10 a group of four riders had broken clear by 20 seconds.

Leading the quartet across the line was Mathew Hayman (Orica-GreenEDGE).

“We don’t have a sprinter here, so we wanted to try to sneak into something if we could,” said Hayman. “It worked out, and I got to stay away for most of the race.

“It’s a great start to the season,” he said. “The crowd here is always huge.”

Hayman, Peter Kennaugh (Team SKY), Calvin Watson (Trek Factory Racing) and Dario Cataldo (Astana) had opened up a lead of 30 seconds on the peloton by the half way mark. The Cycle Instead Sprint also went to Hayman. The group stayed clear to the iiNet Sprint with 10 laps to go where Kennaugh was across the line first but the gap was down to 12 seconds by then as the teams behind started to organise themselves to contest the main prize.

Eight laps from home the peloton regrouped and the jostling for position began in earnest.

Third placed Wippert said the final sprint for the line was ‘just crazy’.

“The team put me in front with five laps to go and from the last corner, it was just go, nothing to lose,” he explained. “I came fast, but not fast enough.

“I am not the first one to lose a sprint against him (Kittel), but I hope by the end of the week I can say I won one against him,” Wippert said. “It’s going to be a hard week. Today we got the podium, so the next step is to try to win a stage.”

Newly crowned Australian road champion Heinrich Haussler (IAM Cycling) was one who lost out in the mad dash for the line finishing fifth across the line.

“I was coming from behind very, very fast (then) the door closed a little bit, I had to brake, stop pedaling, but that’s sprinting,” said Haussler.  “It’s a good sign for the rest of the week (because) the boys did great work today.”

The cyclists will enjoy a rest day on Monday to prepare for the Santos Tour Down Under, the first World Tour event of 2015, which begins on Tuesday with Hostworks Stage 1. The 132 kilometre stage will begin in the charming Barossa Valley town of Tanunda before heading out through world famous vineyards. The peloton will tackle Checker Hill then descend it the finish line in Campbelltown.