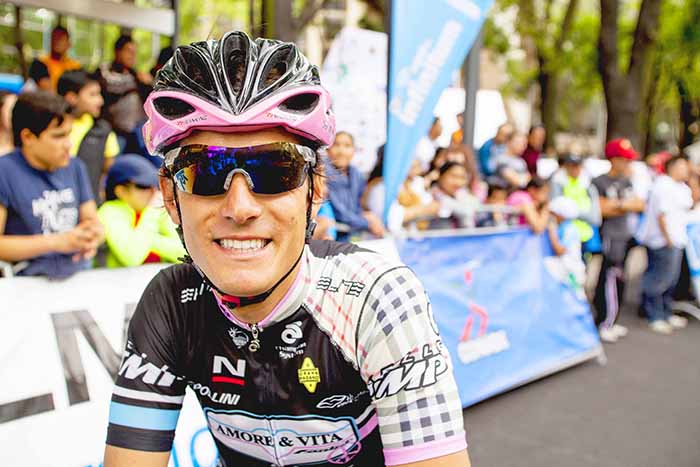 Riders were greeted by another rainy day, as they set out on the 130.4 kilometer circuit race in Ville de Quebec, wherein Leonardo Pinizzotto (Ita) Amore Vita-Selle SMP emerged victorious in a well-earned victory ahead of Brodie Talbot (Aus) Budget-Forklifts Cycling and SmartStop’s Jure Kocjan (Slo).

The quintet drove the gap to over 3 minutes before the peloton began it’s pursuit.

From there, a small group of chasers including Kris Dahl (Can) Smartstop and Kyle Buckosky (Can) H&R Block tried to bridge themselves to the leaders, but to no avail.

With less than 30km to go the escapees were eventually reeled in, as Pinizotto, Squire and Talbot took matters into their own hands.

Pinizotto proved to be the stronger rider as he dropped Talbot for the win, with SmartStop’s Jure Kocjan (Slo) taking the final podium spot in the final sprint to the line.

“This is a victory that I waited a long time,” said Pinizzotto through his manager Phil Cortes. “When I went with the break I felt that it was good and I was confident I could rally the finish line with the fastest time. And when our escape was split, I was more confident. In Philadelphia it was not going too well but Saguenay I regularly found myself in the top ten steps.”

Talbot settled for second but hope for more. “It’s a bit frustrating not to have won the victory, but that’s the bike and Pinizotto is a better climber than me. I was confident of being able to go to the end with the break even if our lead had melted in less than two minutes. I wanted to get even stronger because I knew the peloton was driving fast.”

Meanwhile, Tom Skujins (Lat) Hincapie Sportswear maintained his stronghold over the yellow jersey with a 1:17 margin over Serghei Tvetcov (Rou) Jelly Belly P/B Maxxis in secon and 1:30 over Asbjorn Kragh (Den) Christina Watches – Kuma in third. The top Canuck is Rob Britton (Can) Smartstop at 1:43.

“It was not easy to control the peloton because everyone was trying to leave on a breakaway. My crew did an amazing job because nobody helped us. Surely it will be the same for the last step and we will redouble our efforts. I still have the energy and the whole team is motivated,” said Skujins.