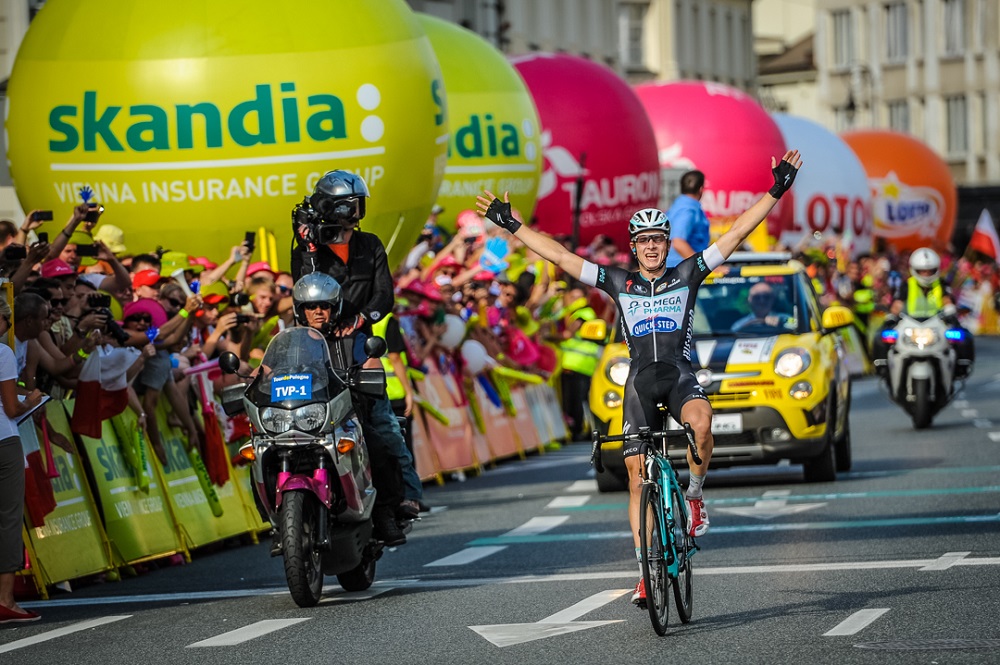 excerpts from Tour of Pologne.pl

Petr Vakoc had a great day in the second stage of the Tour de Pologne, from Turon to Warsaw for 226 km. The young Czech rider from team Omega Pharma – Quick-Step was all alone at the finish line in the Polish capital at the end of a spectacular breakaway that lasted for more than 200 km.

It was supposed to be a long, flat stage adapted to sprinters but the stage got off to a lively start with a break by 3 riders. The trio, composed by Poles Bartlomiej Matysiak (CCC Polsat) and Przemyslaw Kasperkiewicz (Reprezentacja Polski) with Czech Petr Vakoc (Omega Pharma) reached a maximum advantage of about 7 minutes.

Once they made it to the final circuit in Warsaw the Czech rider left his breakaway companions in his tracks, continuing his attack solo. For a while there it looked like he wasn’t going to make it, but with grit and determination he managed to stay ahead of the group attack which was being pulled by the sprinter teams, going on to cross the finish line by himself, arms raised high in triumph.

He won the stage and took the yellow Skandia leader’s jersey. The group came in 21” behind him, paced by Australian Michael Matthews (Orica-GreenEdge), who already wore the pink jersey this year in the Giro. Third place went to Belgian Boris Vallee (Lotto-Belisol).

Now Vakoc leads the general classification with a 27” advantage over Yauheni Hutarovich (Ag2r) and 31” ahead of Russia Roman Maikin (Rusvelo). With the points he gained it today’s break Vakoc also wears the Blue Lotto jersey that identifies the most active rider in the group. The white-red Lang Team jersey for the points classification remains instead on Hutarovich and the cyclamen Tauron jersey for the GPM belongs to Pole Maciej Paterski (CCC Polsat). In the team classification Omega Pharma – Quick-Step remains in the lead.

Tomorrow is the third stage from Kielce to Rzeszow for 174 km; could it be the right chance for the sprinters?

"Being UCI World Tour this is a big race, so to win solo like this is unbelievable," Vakoc said. "The toughest moment was when we started the finishing circuit. The gap was falling fast and my legs started to tire a bit. Then with five kilometers to go it started to get really hard but I just gave it everything for those last five kilometers. I didn’t think about anything other than using every ounce of energy that I had. It’s a beautiful moment for me. I didn’t expect it, and it seems neither did the peloton. When the three of us went away and had a gap at first I wasn’t so sure about my decision, but then I thought maybe if we kept the gap open and I saved enough energy in the final kilometers, I could try to go alone. I was concentrating on trying to save some energy to win a stage. It’s a great feeling to have this effort pay off and earn the first UCI World Tour victory of my career here in Poland. It seems Poland brings me luck as both of my University Championship victories also happened here a few weeks ago. I like racing in Poland. Now, I’d like to fight to keep the jersey as long as I can. It will be hard, but I will fight and I know my teammates will fight with me. We will see in the coming days. I’m a young student on and off the bike and this will be an opportunity to learn in the best way possible. I’d like to thank OPQS for giving me a chance today, and at Tour de Pologne, in this jersey that I am so proud to wear."