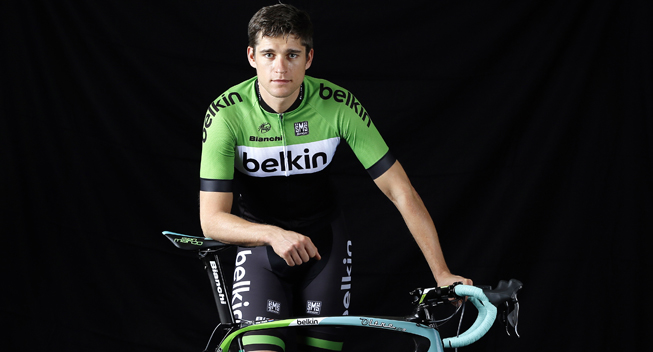 The Dutch rider delivered one of his signature accelerations – to beat Luca Mezgec (Giant-Shimano) in the closing meters, while Michael Matthews (Orica-GreenEdge) crossed the line in third.

Meanwhile, Petr Vakoc retained his hold on the overall lead, after finishing safely in the main peloton. He continues to lead his closest rival, Yauheni Hutarovich (Ag2r-La Mondiale), by 27 seconds, while today’s victory moved Bos up into third spot in overall GC.

Team Belkin controlled the pace of the peloton for most of today’s flat stage, that concluded with a finishing circuit around Rzeszów.

The Australian riders Jack Bobridge and David Tanner, had a strong showing in the waning minutes of today’s stage. However, Giant-Shimano took control of the race during the final 1500 meters, as they proceeded to move their man Mezgec into place.

As the race entered into the final 250 meters, Sacha Modolo initiated a last minute surge. However, Bos emerged from the slipstream of Mezgec and Mathews during the final right hand turn, to power past his rivals to seize the win.

A four-man breakaway group containing Salvatore Puccio (Sky), Björn Thurau (Europcar), Pawel Franczak (Poland) and Mateusz Taciak (CCC Polsat), got underway earlier on in today’s stage. And, at one point, the escapees had established a lead of 3:15 over the peloton.

However, as the race entered into the final 30 kilometers, their advantage had been reduced to a little more than a minute. And, with 12 kilometers remaining, the breakaway group had been caught by the peloton, which was being fiercely driven by Team Belkin.

During the beginning of the final lap of 6 kilometer finishing circuit, Sam Bewley (Orica-GreenEdge) attempted to ride clear of the field. However, he was quickly swept up by the peloton.