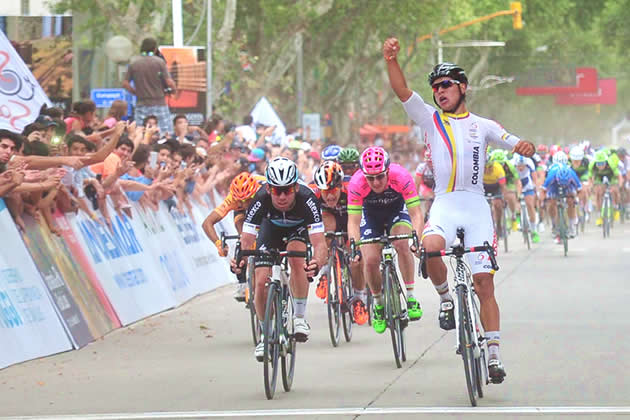 Indeed, the 20-year old Colombian rider followed in the slipstream of Etixx-Quick-Step, before executing his perfectly timed acceleration to the finish.

At one point, the escapees had established a gap of 4 minutes over the peloton. However, as they reached the half-way point in the stage, their gap fell to 3 minutes.

With 55 kilometers remaining, Etixx-Quick-Step came to the front of the peloton, quickly reducing the gap to a manageable 2 minutes. And, as the race entered the final 15 kilometers, the breakaway trio had been completely reeled in.

From there, Cannondale-Garmin’s Ted King and Adrian Alvarado (Chile), initiated an attack of their own, albeit with short lived results.

There were a few subsequent attacks thereafter, but none were able to stick either.

As the race entered into the final descent before the finish, a group of 15 riders succeeded in splitting from the peloton. But, just like previous attempts, they too were reeled back in.

It was Michal Kwiatkowski who lead out Etixx-Quick-Step during the closing kilometer. But, his efforts to set-up teammate, Mark Cavendish, in the waning monuments of the race fell short, as Gaviria was able to come around the “Manx Missile” just before the line – to seize the victory.