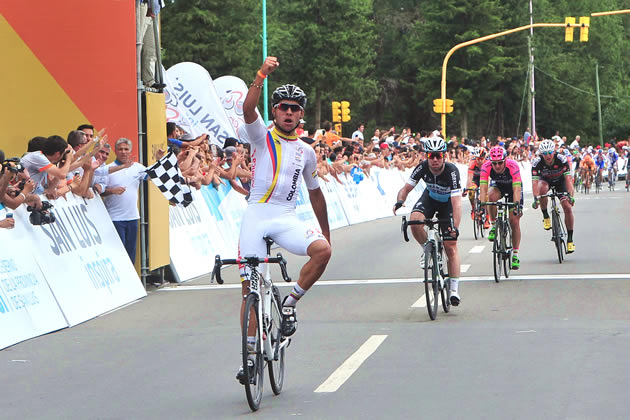 Fernando Gaviria claimed 3 stage of this year’s Tour de San Luis, in what was not only a chaotic sprint finish, but elicited a complaint from Mark Cavendish as well.

Indeed, Cavendish crossed the line gesturing a complaint to race officials about the Colombian rider’s sprinting style, which ultimately fell upon deaf ears.

At one point, the breakaway group had established a 5 minute advantage over the peloton. But, as the chase began to organize, their gap fell steadily.

Palma won the first intermediate sprint at the first 100 kilometer check point, while Rodriguez claimed the second sprint – inside the 25 kilometer to go mark.

Shortly thereafter, the breakaway was caught. And, from there, Ted King (Cannondale-Garmin) and Adrian Alvarado (Chile) were the first two riders to initiate an attack.

However, the duo’s chances of getting away were short-lived, as the fierce pace of the peloton prove to be too much for them to stay away.

Inside the final 20 kilometers, the peloton was plagued by a crash, that sent numerous riders onto a sidewalk in order to avoid the chaos. At the same time, the dozen or so riders who were ahead of the crash managed to get reeled in as well.