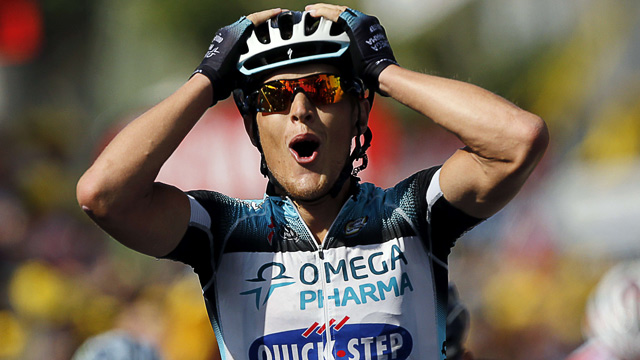 Trentin, who was led out perfectly by Martin in the final kilometer, attacked with 200 meters to go, and edged out Bennati by half a wheel.

After four stages for the sprinters, today’s race returned to the mountains with four categorized climbs.

Vladimir Isaichev, Michael Albasini, Jacopo Guarnieri and Jacobus Venter broke free early on, and had an advantage of 4:34 heading into the first climb of the day, the category 1 climb of the Grand Chaumont.

That lead dropped to less than three minutes at the summit, but the quartet succeeded in pushing their advantage back out again on the descent.

However, they were caught with 37 kilometers remaining by the peloton which was being driven by Team Sky.

Sagan attacked on the final climb and managed to open up a gap, followed by a powerful descent.

With victory in sight, Sagan continued to lead with Marcus Burghardt during the remaining three kilometers.

However, Sky brought the field back together, and Martin took over the front, leading the race into the final kilometer and causing a split in the peloton to deliver his teammate to victory.