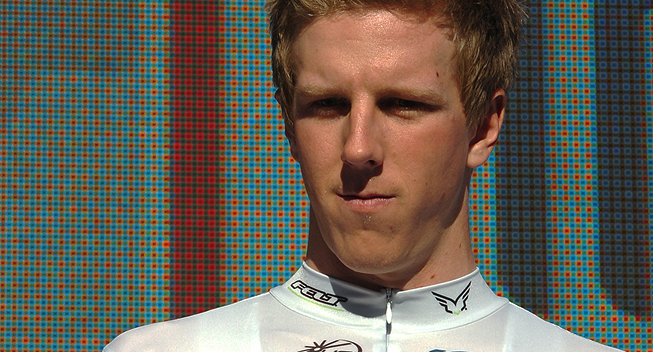 Jonas Ahlstrand (Sweden/Giant-Shimano) came around Belkin’s Theo Bos (The Netherlands) to claim stage 2 of this year’s Tour of Alberta in a sprint finish in Red Deer today.

The riders were relieved to race on a dry day after yesterday’s chilly deluge. The peloton traveled two neutral laps around Innisfail before heading north to Sylvan Lake to contest two intermediate sprints over one and a half laps of the town. Ahlstrand took the first sprint and Daryl Impey (South Africa/Orica-GreenEdge) the second, with top Canadian Ryan Anderson (Optum) coming runner-up to Impey.

It wasn’t until the final 55 kilometers, that a breakaway finally got underway. It started as a 15-man affair, but it fragmented as the long, strung-out peloton pursued. From there, a trio of riders containing King of the Mountains leader Robin Carpenter (USA/Hincapie Development), Simon Yates (Australia/Orica-GreenEdge) and Kiel Reijnen (USA/United HealthCare), managed to ride clear. Howverm they were quickly joined Cameron Wurf (Australia/Cannondale) and American Jim Stemper (5-Hour Energy).

The day’s only King of the Mountains points were on offer at the 27-km mark, after the road had dropped down into the Red Deer River basin. At the top of the ascent Yates beat out Carpenter for the maximum points and usurped the red polka-dot jersey.

As the race neared Red Deer for three 4-km laps, Ben King (USA/Garmin-Sharp) and Frenchman Aurélien Passeron (Silber) bridged over to the break to create a leading septet. King, Yates and Reijnen were the last three standing with 10-km to go, but a couple of their breakaway companions latched back on in an attempt to elude the Belkin and Giant-Shimano led peloton. King was the final escapee to be absorbed.

As teams organized themselves to launch their sprinters.  Ahlstrand chose the right wheel to follow in Bos. And, once the Swedish rider surged, he had time to celebrate at the line. With the victory and the earlier sprint points, Ahlstrand moves into second in the points competition behind Zepuntke. Thursday’s winner admitted that his stage win wasn’t Giant-Shimano’s priority:

“I was trying to help Tom as much as possible – so it worked for both of us.”