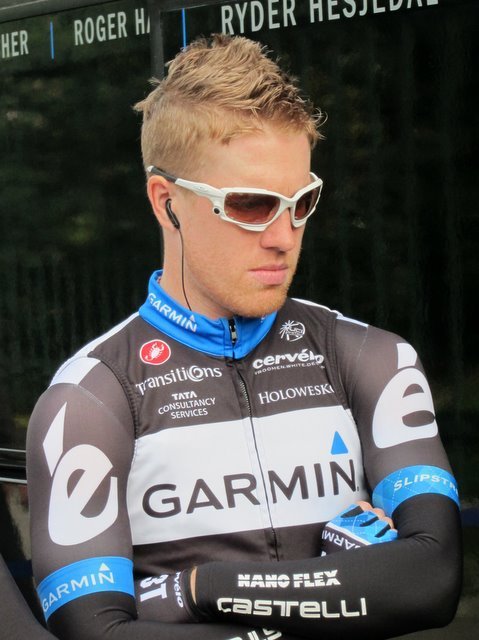 excerpts taken from Tour of Beijing.com

Farrar’s last win was at the Tour de l’Eurometropole in 2013, with a number of close calls throughout the 2014 season. However, this time his win was a convincing one, with over a bike length back to Mezgec which not only netted him the stage win, but the overall points classification as well.

“It was a long time coming this season,” the 30-year-old explained at the finish. “It was a year of seconds and thirds and fourths so to finally win, so close to maybe one of my last chances of the year I’m really happy.”

“It was not an easy day today,” said a relieved Gilbert.

“It was really cold also with the headwind for the last 90km. The team controlled well and at the end we also got the help from the sprinter’s teams. I wasn’t really taking risks in the final…”

On a stage featuring seven categorized climbs over stunning mountain vistas, the peloton didn’t have a chance to take in the views with fast technical descents, including the final 11km run into the finish. After a number of attacks, the sprinter’s teams came to the fore in the final kilometres with Sky, Giant-Shimano, Katusha and Belkin all moving to the front. Orica-GreenEdge looked to be in control as they attempted to set up the win for young gun Caleb Ewan who hit the lead with 200m remaining before fading to 10th.  Farrar concerned he started his run too late.

“I had the legs but there was definitely some luck involved there,” the former grand tour stage winner said. “It was a hard day and I just barely made it over the last climb. I had a hard time getting back to the front of the race. I think I came out of that last corner, really way too far back and I just got lucky that a hole opened up and I was able to go for it.”

Meanwhile, the sprinters survive the climbs in the shadow of The Great Wall, unlike the first two days, which took the peloton a good 20km to determine a breakaway.

Golas took the maximum points over six of the day’s seven climbs, with the breakaway steadily establishing an advantage that grew to around 4:30 as the race weaved through the hills around parts of The Great Wall of China which proved a spectacular backdrop. That gave the race a new virtual leader out on the road, with Alaphilippe starting the day at just 11 seconds behind Gilbert, but also meant that the six were never given too much rope.

The penultimate climb of the day was highlighted by the Panda of the Mountain prime, won by Kroon. The Dutchman was greeted by a sleuth of the rare creatures, resulting in pure pandemonium given it’s a rare sight in the wilds of China. The excitement signaled the beginning of the end for the breakaway, with the hammer well and truly down at the head of the peloton. This briefly caused a split of around 30 riders at the back of the peloton on the descent, but strung out, they managed to catch back on shortly before the final intermediate sprint with the gap to the break hovering around the minute mark.

Alaphilippe was the first man dropped from the break after 149km of racing, with Berard awarded the stage’s most aggressive rider. With one final two kilometre climb to come, the remnants of the break were reeled in as the 4.3 per cent ascent began. With the race together, attacks soon followed, firstly by Adam Hansen (Lotto Belisol). The Australian was chased down by Julian Arrendondo (Trek Factory Racing) and Julien Vermote (Omega Pharma – Quick-Step) and their brief lead over the peloton was absorbed with five kilometres left to race. Another attack from Carlos Betancur (AG2R La Mondiale) was short-lived, leaving it to the fast men to decide the stage.

Ahead of Monday’s Queen stage which will certainly decide an overall winner, Gilbert said he would be giving himself every chance to hold on to the red jersey.

“Some guys said this climb is hard, some guys say no but what I saw on the graphic is a 12km climb and we will see,” he said optimistically. “I’m in good shape and there’s not so many good climbers here. “There will be attacks from everywhere.”