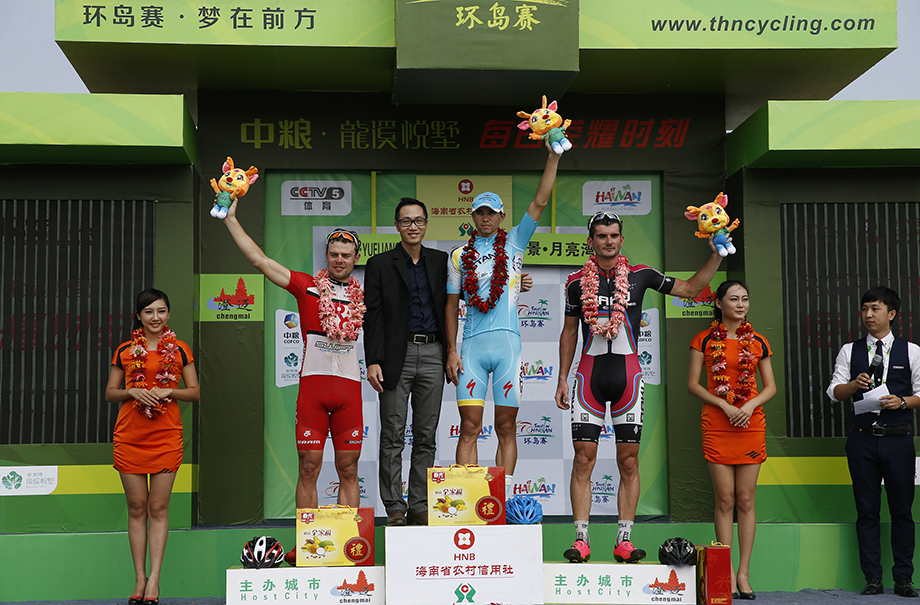 Wang Meiyin claimed the yellow jersey from Niccolo Bonifazio (Lampre-Merida) at the conclusion of today’s stage 3 in Yueliangwan.

Meiyin’s victory in the second intermediate sprint led him to the first position overall, as none of the top 3 previous highest ranked riders, Bonifazio, Andrea Palini and Moreno Hofland, managed to score on the finish line where Arman Kamyshev from Kazakhstan emerged as stage 3 winner of the ninth Tour of Hainan. So after three stages, all three Pro Teams in contention (Belkin, Lampre-Merida and Astana) have bagged a success.

“One kilometer away from that intermediate sprint point, about twenty riders had broken away and started to fight for time bonus”, Wang explained. “Very few of them remained behind me when I accelerated and I was lucky to gain the time bonus . It’s not only an honor for me but it’s an honor for Chinese people that I’m wearing the yellow jersey in such a big race. Now I want to retain the lead with the help of my team in order to make Chinese people even prouder.”

This is not the first time Wang leads an Asia Tour H.C. event. Last year he led Le Tour de Langkawi for two days after winning the legendary stage to the Cameron Highlands and he finished the Malaysian race fifth overall.
“For sure he deserves the yellow jersey”, points classification leader Palini commented. “When he attacked for chasing the time bonus, it wasn’t easy considering the high rhythm of the race. There’s no doubt he’ll do everything he can to keep the jersey. Maybe he’ll go for more intermediate sprints but we’ll also look for time bonus, although it’ll be in the final sprints until stage 7 where we’ll see how well Wang can climb.”
After this intermediate sprint in Zhipo Town (km 65), five riders broke clear: Floris Goesinnen and Jordan Kerby (Drapac), Artyom Zakharov (Vino4ever), Milan Kadlec (Dukla Praha) and Samir Jabraylov (Baku). They got a gap of two minutes and gave a hard time to the chasing peloton.
“It’s been a fight between us and Belkin”, Palini acknowledged. We didn’t want to let any of them going in a breakaway because we wanted to find some help in the finale but we ruined our strength and we lacked manpower with 2km to go. On the other hand, Astana got well organized and was left with lead out riders.”

“I remained boxed in”, Bonifazio said. “The strong side wind was the source of a mistake. I rode too far right.” Second placed Maksym Averyn from Synergy Baku Cycling Project also praised Astana’s good job. “I tried to win but it’s also nice to get a podium finish in an important race like the Tour of Hainan”, the sprinter from Azerbaijan noted. “In the last thirty kilometers, there was a strong side wind, so it was really important to be in a good position. My team did a great job to keep me in the top 5 or 6 all the time but there was one rider faster than me. Astana also did a great job. They made the race very active at the end.”

While Ruslan Tleubayev was expected to be Astana’s sprinter, Kamyshev got the lead out. “I felt better than him during the race”, said the 23 year old from Kazakhstan who was one of the best U23 riders in the world prior to joining the Pro Team last year with victories in Nations Cup races ZLM Tour and Ville de Saguenay under his belt.
“This is the fourth time Astana comes to the Tour of Hainan. The organization is very good and this is a very important race for us as the only Asian Pro Team, so we’ll do our best to get more results than this one in the coming six days.”
The Tour of Hainan continues tomorrow, with a 145.8km from Wenchang to Xinglong.
1 KAMYSHEV ArmanAstana Pro Team20303:05:09
2 AVERIN MaksymSynergy Baku Cycling Project1418,,
3 WIPPERT WouterDrapac Professional Cycling812,,
4 METLUSHENKO YuriUkraine77,,
5 PALINI AndreaLampre-Merida64,,
6 HOFLAND MorenoBelkin-Pro Cycling Team53,,
7 SHPILEVSKY BorisRTS-Santic Racing Team42,,
8 BONIFAZIO NiccoloLampre-Merida21,,
9 KANKOVSKY AloisTeam Dukla Praha,,
10 TLEUBAYEV RuslanAstana Pro Team,,
11 KOZHATAYEV BakhtiyarAstana Pro Team,,
12 GONÇALVES DomingosTeam La Pomme Marseille 13,,
13 JULES JustinTeam La Pomme Marseille 13,,
14 ASTAFYEV StepanVino 4ever,,
15 SURUTKOVICH AlexSynergy Baku Cycling Project,,
16 ZEMLYAKOV OlegVino 4ever,,
17 DYACHENKO AlexandrAstana Pro Team,,
18 CANTWELL JonathanDrapac Professional Cycling,,
19 BUTTO FedericoBurgos-BH,,
20 SALLEH HariffTerengganu Cycling Team