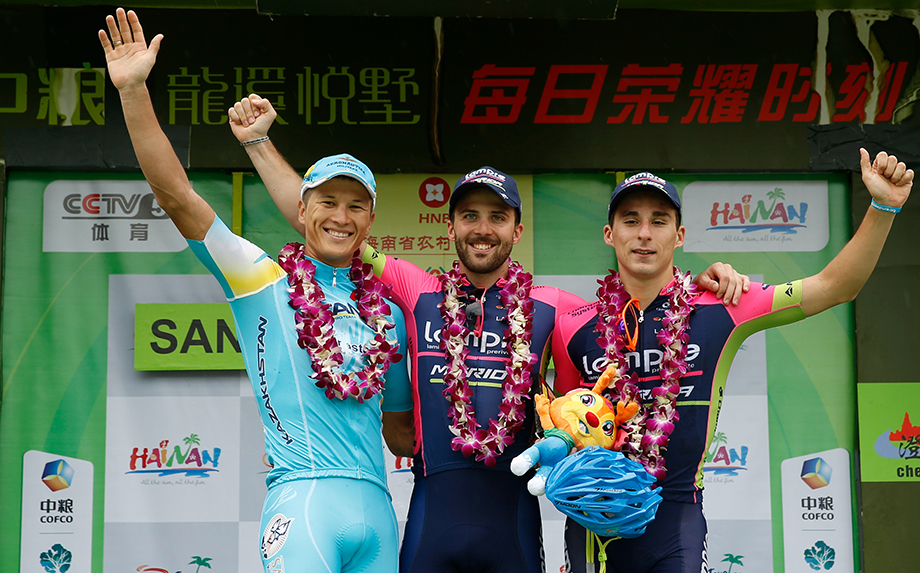 After finishing second, third, fifth and second in the first four stages of this year’s Tour of Hainan, Italy’s Andrea Palini finally got the victory he was looking for in a rained soaked day of racing on a tropical island.
Lampre-Merida doubled up with Niccolo Bonifazio in second place ahead of Astana’s Ruslan Tleubayev. Palini moved into the overall lead as well after half way into the nine-day long Tour.

“Finally I managed to get my first win of the season even though it’s at the end of the season”, Palini reacted. “Winning is everyone’s goal. Thanks to the help of my team-mates, I’ve made it. In the hill Ferrari and myself. We sprinted at perfection.”

“Astana put the hammer down in the climb”, Bonifazio echoed. “We took over for the final sprint. Mori pulled from 3km to 1km to go. Then Ferrari rode until 200m to go. I followed and at the very end, Palini passed me. Considering the time bonus already collected, it was easier that he’d take the yellow jersey.”
Former race leader Julien Antomarchi of La Pomme Marseille was also part of the group of a bit more than twenty riders who made it to the finish. A notable absent was defending champion Moreno Hofland of Belkin who actually warned from the very beginning that he wouldn’t be racing for GC at the difference of his team-mate Nick Van der Lijke who was up there at the finish.
“Astana’s attack on the climb was very impressive”, Antomarchi noted.
Four Astana riders made that finale very hard but it didn’t include the winner of the 2012 Tour of Hainan Dmitriy Gruzdev.
“This time around, Zeits are our GC riders”, informed third placed Ruslan Tleubayev who was also accompanied in the leading pack by stage 3 winner Arman Kamyshev.
After the climb, they overtook the lone leader left from the initial breakaway of five riders Sergey Grechyn (Ukraine national team) who was earlier up the road with Chinese national champion Zhao Jingbiao (Hengxiang), Ho Burr (Hong Kong), Mario Rojas (RTS-Santic) and Adrian Kurek (CCC Polsat). They had a maximum advantage of four minutes. “I targeted the polka dot jersey”, said the Ukrainian who was the King of the Mountains at the Presidential Tour of Turkey last year and reached his goal for the day but added:
“I haven’t raced much this year and I don’t know how my legs will feel after such a hard stage in the rain.”
Palini didn’t have that kind of concern.
“The way we rode today shows the good shape and the team spirit we have”, the Italian said. “I have the yellow jersey passed half way into the Tour of Hainan but I still see it difficult to win the overall classification. On stage 7, the hills remain a question mark for me and it’s going to be difficult to control the race every day so we’ll keep looking at getting the best result each day and hopefully it’ll bring us the maximum of satisfaction at the end.”
1
PALINI Andrea
Lampre-Merida
20304:32:51
2 BONIFAZIO NiccoloLampre-Merida1418,,
3 TLEUBAYEV RuslanAstana Pro Team812,,
4 KAMYSHEV ArmanAstana Pro Team77,,
5 ASTAFYEV StepanVino 4ever64,,
6 VAN DER LIJKE NickBelkin-Pro Cycling Team53,,
7 KERBY JordanDrapac Professional Cycling42,,
8 ASADOV ElchinSynergy Baku Cycling Project21,,
9 ZAGORODNY VolodymyrUkraine,,
10 JABRAYILOV SamirSynergy Baku Cycling Project,,
11 GRECHYN SerhiyUkraine,,
12 DUENAS NEVADO MoisesBurgos-BH,,
13 EL FARES JulienTeam La Pomme Marseille 13,,
14 ZEITS AndreyAstana Pro Team,,
15 ANTOMARCHI JulienTeam La Pomme Marseille 13,,
16 WANG MeiyinHengxiang Cycling Team,,
17 GONÇALVES JoséTeam La Pomme Marseille 13,,
18 OWSIAN LukaszCCC Polsat Polkowice,,
19 MIHAYLOV NikolayCCC Polsat Polkowice,,
20 FERRARI RobertoLampre-Merida