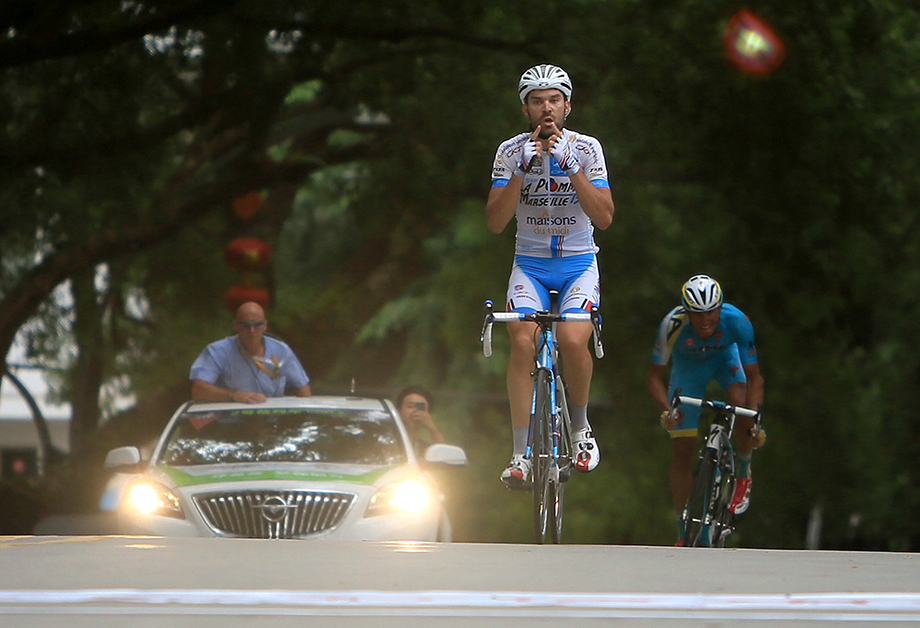 Already the winner of stage 4, Julien Antomarchi of La Pomme Marseille doubled up in Wuzhishan as he claimed the queen stage ahead of Astana’s Andriy Zeits while Niccolo Bonifazio from Lampre-Merida finished in third place with a deficit of 39 seconds. Antomarchi moved back into the lead with a high chance of winning the ninth Tour of Hainan overall.

“This confirms my momentum”, Antomarchi commented. “The second stage win really says everything about how we’re going. My first victory was great as well but it was due to circumstances. I gave it all at the end of long breakaway but I might as well have lost, had the peloton ridden differently. Today, it’s really an affair of the strongest riders in the race. At the bottom of the last climb with about fifteen kilometers to go, I followed Zeits who had to make up time on GC. I only relayed him in the last kilometer of climbing and then in the downhill towards the finish. I outsprinted him with 150 metres to go. It’s a beautiful victory.”
“I’ve done everything I could to get rid of the boy from Marseille”, Zeits explained. “But we rode together downhill where it was slippery because of the rain earlier on. I heard we had an advantage of 1.12 atop the hill and only 20 seconds at the bottom. As a team, we wanted a better result than what we got today but we’ve done our best and now I lead the Asian rider classification. I wasn’t sure if we’d manage to beat Wang Meiyin there but we did. He’s very strong on the flat, he’s got power for sprinting but he’s bigger than me and I think I had an advantage over him because of my physique in the hills today.”
The stage started very fast although it was almost 200km long but there was a fight in the air for the polka dot jersey. “Many riders were looking at me”, realized King of the Mountains Sergey Grechyn who courageously retained his lead. “But eventually I rode away with Tom Leezer of Belkin and Branislau Samoilau of CCC Polsat and I could collect the points I needed, which I didn’t think I’d be able to since I haven’t raced much this year. I started the season with a broken arm and the Tour of Hainan is my last race for 2014.”
Grechyn’s future is uncertain, so is Antomarchi’s. The Frenchman is on the hunt for a new contract. “We don’t often get the chance to race against Pro Teams like Astana, Belkin and Lampre-Merida”, the 30 year old said. “It’s motivating to give our best in order to show that the gap between our respective levels isn’t that big. With three riders from La Pomme Marseille in the top 6 today, we prove that we’re a strong team, so I can count on my team-mates to help me defend the yellow jersey in the last two days. Secondly, the teams of the sprinters will be interested in riding behind breakaways as well because if no one in the front group is dangerous on GC, we can let them go for a stage win.”
Bonifazio seemed to have accepted Antomarchi’s superiority in the fight for the yellow jersey. “Today, my team has worked very well until the last climb and I’m quite happy with my performance uphill but it wasn’t enough for keeping the lead”, the young Italian said. “It was a question of legs. The two strongest riders have made it. Now I’ll defend the green jersey and I’ll target the second place overall.”
Stage 8 will take the riders from Wuzhishan to Danzhou on a 154.1km course with a category 1 climb at the very beginning (summit after 8.84km of racing).
Top 20 Finishers
1
ANTOMARCHI JulienTeam La Pomme Marseille 1320305:03:00
2 ZEITS AndreyAstana Pro Team14180:01
3 BONIFAZIO NiccoloLampre-Merida8120:39
4 EL FARES JulienTeam La Pomme Marseille 13770:41
5 DYACHENKO AlexandrAstana Pro Team64,,
6 GONÇALVES JoséTeam La Pomme Marseille 1353,,
7 MORI ManueleLampre-Merida420:43
8 VAN DER LIJKE NickBelkin-Pro Cycling Team210:57
9 DUENAS NEVADO MoisesBurgos-BH,,
10 WANG MeiyinHengxiang Cycling Team1:08
11 BONO MatteoLampre-Merida,,
12 OWSIAN LukaszCCC Polsat Polkowice1:10
13 HONKISZ AdrianCCC Polsat Polkowice,,
14 SURUTKOVICH AlexSynergy Baku Cycling Project1:15
15 SHUSHEMOIN AlexandrVino 4ever,,
16 MIHAYLOV NikolayCCC Polsat Polkowice,,
17 ZAGORODNY VolodymyrUkraine,,
18 SALAS IbaiBurgos-BH1:19
19 ASADOV ElchinSynergy Baku Cycling Project,,
20 NIÑO CORREDOR VictorRTS-Santic Racing Team1:25