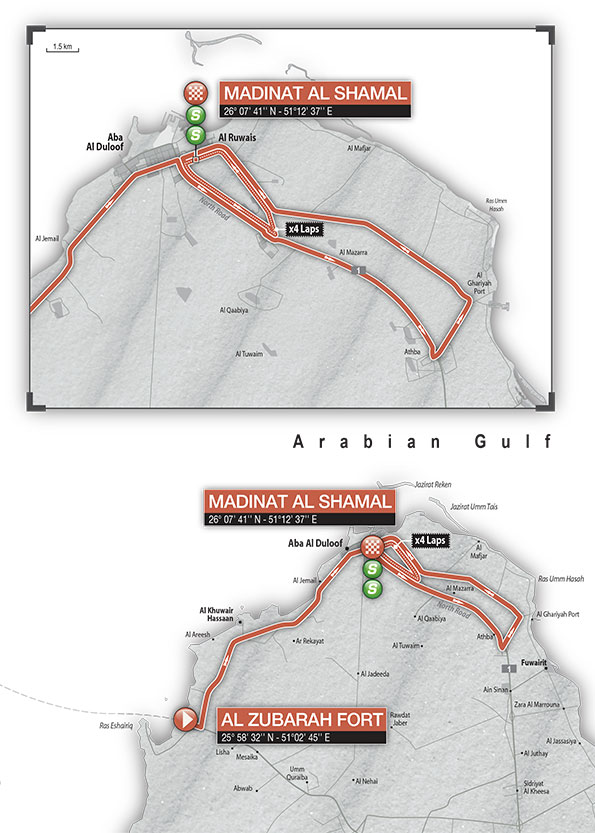 excerpts from Tour of Oman

Despite the long distance, despite the hot weather conditions and despite the steep final climbs, there was no stopping Fabian Cancallara today. The Swiss conquered his first ever stage of the Tour of Oman in outstanding fashion. Part of a final group of favorites  the 2010 event winner managed to beat Alejandro Valverde and Greg Van Avermaet on the final straight in Al Bustan. Cancellara conquers the overall leader’s Red jersey after a very eventful day. There was a like a taste of Milan – San Remo on this second day of the event.

The temperature had raised up several degrees for day 2 of the Tour of Oman and the longest stage of the event. The 143 riders of the race including Red Jersey Andrea Guardini (AST), took off from the magnificent Al Hazm Castle at 10:47AM in extremely hot weather conditions for a 195.5kms ride all the way to Al Bustan. Four men managed attacked after just two kilometers  Smukulis (KAT, Van Hecke, Van Meirhaeghe (both TSV) and Barbin (BAR). Not too concerned, the pack let this group of breakaway riders take off and the gap increased rapidly. After 11.5 kilometres, it had indeed reached 5’15. The first intermediate sprint (km 35.5) was claimed by Van  Meirhaeghe ahead of Smukulis and Van Hecke while the pack remained 5′ adrift. With team Astana taking on the chase, the gap started dropping. Hit by a puncture, Barbin was naturally dropped by his companions and never managed to move back to the front. After 46kms, the Italian was 1′ adrift while the pack had moved slightly closer at 4’20. Barbin was eventually caught at km 50.

The front three riders carried on pushing hard at the front and again the gap over the pack increased. It even reached a maximum 8’10 at km 86. Teams Movistar and Tinkoff-Saxo then decided to really chase. At the second bonus sprint (km 143) claimed by Van Meirhaeghe in front of Van Hecke and Smukulis, the pack remained 4’15 adrift. With 25kms to go, the front three could only enjoy a 2′ lead. Time then came for the first climb of the day. Going up Al Hamriyah, Gatis Smukulis powered away. The Latvian reached the top with a 30” advantage over Van Meirhaeghe and Van Hecke, and 1’10 over a pack that had dropped the exhausted Red Jersey, Andrea Guardini. Eventually only one man stayed clear of the chasing peloton of around 80 riders, but Smukulis after his impressive effort was caught at km 179.

In the second climb of the day (Al Jissah), four men managed to break away: Fuglsang (AST), Hermans (BMC), Arredondo (TFR) and Meintjes (MTN). They reached the top, led by Arredondo, with a slim 20” lead but were caught just a few moments later by a group of 14 strong men. Among the leading bunch with just 5 kilometres to go were the likes of Van Garderen, Van Avermaet (both BMC), Sagan, Majka (both TCS), Moreno (KAT), Cancellara (TFR) and Pozzato (LAM) but no Nibali (AST), Pinot (FDJ) or Rodriguez (KAT) dropped in the previous climb.

In the final slightly uphill straight, Fabian Cancellara perfectly dosed his effort overtaking his strongest rivals to capture the stage win. The Swiss rider who had won the very first edition of the Tour of Oman, claimed his first ever stage in the Sultanate, beating Alejandro Valverde and Greg Van Avermaet to the line. Like in 2010, the 33-year-old conquers the overall leader’s Red Jersey with a 4” advantage over Valverde and 5” over Konrad (BOA). Cancellara also takes command of the points classification (Green jersey) while Konrad remains the best young rider. Present in the breakaway for the second consecutive day,  Van Meirhaeghe claims the polka-dot combativity jersey.