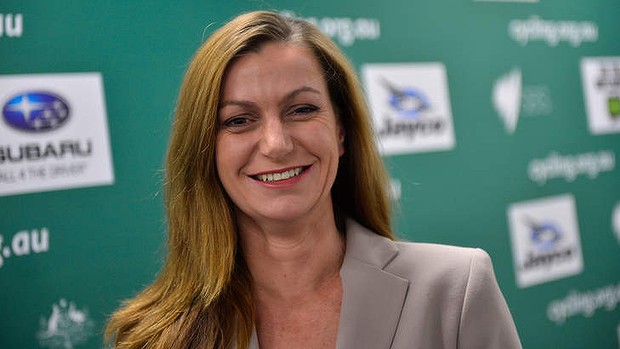 The new Australian vice president of cycling’s world governing body says people should not expect the sport to be improved overnight but change, including greater equality for women, is coming.

Former professional rider Tracey Gaudry continued her rise up the administrative ranks on Saturday when she was appointed one of three new UCI vice presidents under new leader Brian Cookson.

"We have for the first time a woman in an important role in the UCI," Cookson told reporters in Florence where the world road championships are being held.

"I have a lot of confidence in all of those three people and I’m sure that we can really move forward now to take the UCI in a new direction."

Gaudry, a two-time Olympic road cyclist and chief executive of the Amy Gillett Foundation, became the first woman to serve on the UCI management committee when she won the Oceania presidency in late 2012.

Her ousting of Mike Turtur was partly based on her credentials in areas such as reform and anti-doping.

Gaudry on Saturday said her 2012 appointment heralded a fresh approach to women’s cycling, governance and anti-doping that culminated in the appointment of Cookson on Friday.

She insisted it was "very important" for a woman to be named one of the vice presidents in 2013.

"Those decisions are not symbolic decisions, they are deliberate decisions to ensure that the sport of cycling embraces everything that it’s about, and gender is naturally one part of that," Gaudry told AAP, adding she’d also be focused on the sport’s globalisation and grass-roots development along with the much-publicised drive for more stringent anti-doping measures.

The Australian has a four-year term and is committed to improving equality within cycling where the disparity between the financial backing for men’s and women’s teams remains great.

"We’ve already started the conversations with the right people and the right groups," she said as the women’s road race was underway in Tuscany.

"We are already on the way. (But) we won’t change the world tomorrow and the last thing the community of cycling could and should expect, and hope, is that suddenly tomorrow everything is 500 per cent changed."