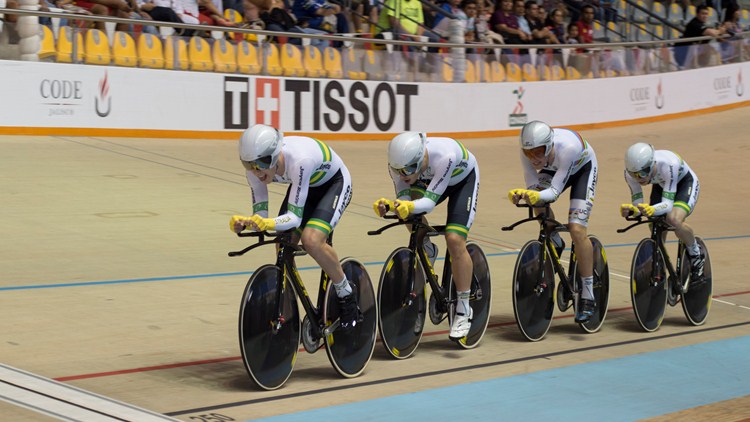 Great Britain and Australia share the honors in the team events. Germany’s Joachim Eilers and Russia’s Anastasiia Voinova are victorious in the men’s keirin and women’s individual sprint.

Team Pursuit: Australians rule the roost
Even without their world champion quartet, the Australians are still kings of the team pursuit. At the first day’s racing in Guadalajara, Daniel Fitter, Alexander Porter, Miles Scotson and Samuel Welsford were dominant in their favourite event, winning in 3:55.976. Alexander Edmondson, Australia’s individual and team pursuit world champion at the last UCI Track Cycling World Championships in Cali congratulated his compatriots by tweeting: "Safe to say Aussie track endurance is in a good place!" Great Britain (3:58.129) and Germany (3:57.828) completed the first podium of the season.

Team Sprint: the British show their hand
With the second round of the UCI Track Cycling World Cup due to be held at the hallowed London velodrome (5-7 December), the British showed that they are ready! Great Britain, reigning Olympic Champions but absent from the podium in the last two UCI Track Cycling World Championships, won narrowly with Philipp Hindes, Jason Kenny and Callum Crichton Skinner. Skinner has seamlessly taken up the baton of riding anchor leg in this legendary team from Sir Chris Hoy, the 2012 Olympic Champion who has since retired. The British squad (43.092) squeezed ahead of Germany (43.106). World Champions New Zealand beat the Netherlands for third place in 42.769.

Keirin: Eilers is the strongest
In the absence of the reigning World Champion, France’s François Pervis, it was Germany’s Joachim Eilers who won the keirin. The 24-year-old, recently crowned European Champion in the discipline, extended his good run of form and will take the UCI Track Cycling World Cup leader’s jersey to London for the next round on 5-7 December. Eilers beat Matthew Glaetzer (Australia) into second place, while Fabian Hernando Puerta Zapata (Colombia) was third.

Team Pursuit: Great Britain in a different class
The British started their international season in an identical fashion to last year: on the top step of the podium! Laura Trott and Elinor Barker, World Champions and world record holders, were accompanied by Ciara Horne and Amy Roberts. The quartet produced a time of 4:21.256 to crush their Canadian opponents in the final (4:26.122). China produced an impressive ride to finish third in 4:23.911.