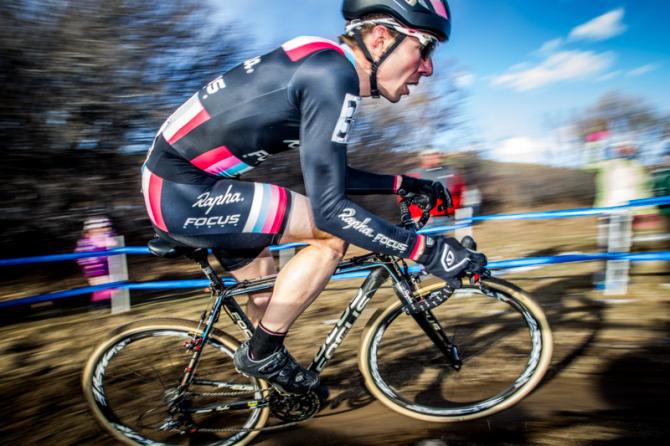 One day removed from the 24-hour suspension mandated by the Austin Parks and Recreation Department, who cited the need to protect the exposed root systems of 100-year-old heritage trees after excessive deterioration of the soil beyond anticipation as reason for the postponement, Compton collected her 11th women’s elite cyclo-cross championship on the restructured course.

“The course was still technical and still hard, and it definitely wore on you,” said Compton after the win. “I wanted to make sure I didn’t go too hard. I always had the people behind me in mind, but it helped having a gap because that way I could relax and focus on the lines.”

Compton started the contest outside the top 10, but quickly found her groove as she ascended through the field. By the time she was given the bell, Compton left little doubt that she would repeat again, crossing in 41:01. Kaitlin Antonneau (Racine, Wis./Cyclocrossworld) assembled a strong 41:26 run, chased byRachel Lloyd (Fairfax, Calif./California Giant Cycling) in 41:40.

Like Compton, Powers found a familiar place atop the men’s podium, finishing his seven-lap campaign in just over an hour to defend his title and earn his third cyclo-cross national championship in the last four years. In a continuous battle with Jonathan Page (Shelburne, N.H./XcelLED-Fuji), Powers was able to pick up some distance early on after Page flatted coming out of the pit, and Powers never looked back, taking the win in 1:00:33. Page, who won the 2013 title over Powers, placed second in 1:01:04, trailed 41 seconds later by Zach McDonald (Bainbridge Island, Wash./Cycocross Project 2015) in 1:01:45.

“You’ve got to really stay on top of it and you can’t look back,” Powers said. “You’ve got to stay in your own race, and I never looked back. I was just trying to mark (Page) as much as I could, but I wasn’t thinking about it; I was just looking forward to my own race.”

Logan Owen (Bremerton, Wash./California Giant Cycling-Specialized) remained perfect in his career at the USA Cycling Cyclo-cross National Championships, making it two straight U23 men’s national titles and 10 championships overall. He stepped off and hoisted his Specialized bike at the finish line at the 56:06 mark after pacing teammate and silver medalist Yannick Eckmann (Boulder, Colo./California Giant Cycling-Specialized), who finished in 57:15, and bronze medalist Curtis White (Delanson, N.Y./Cannondale Cyclocrossworld), who crossed in 57:31.

“It’s an amazing feeling,” Owen said. “I was really, really motivated to get an even number (of national titles) and get double digits. I’m really excited. I went out there and rode my hardest, and it just turned out that I was the best on the day.”

In the women’s U23 division, Ellen Noble (Kennebunkport, Maine/JAM Fund-NCC) assembled a convincing 42:48 run, which was the sixth best time on the course amongst the elite and U23 divisions, which raced simultaneously. Hannah Finchamp (Altadena, Calif.) took silver nearly three minutes later in 45:30, and Emily Shields (Advance, N.C./Hearts Racing Club) finished third in 47:41.

“I started second row and just went really hard at the start because I knew there was going to be some traffic,” Noble said. “Racing with the elites is so amazing because everyone is so fast and you can trust the lines. I love racing out there with girls like Katie (Compton). It’s phenomenal.”