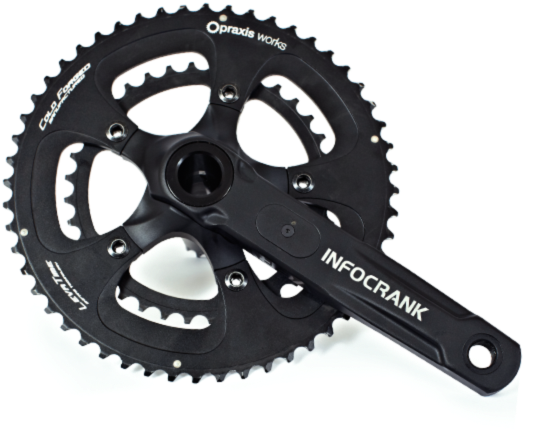 According to the Australian based company, Verve, their newly released InfoCrank does.

Designed from scratch, the new InfoCrank uses strain gauges, which have been carefully hidden in a load cell, in the direct path of torque –  so that they only measure tangential force –  and not  any "twisting" of the crank arms themselves.

According to Verve, this means unparalleled accuracy to the point where swapping bikes or riders has no effect on the quality of the data, as it remains consistent – even regardless of temperature. Verve also claims that the InfoCranks are accurate to within 0.5 percent of each other.

Verve began developmentof the Info Crank in collaboration with the Australian Institute of Sport. In the end, the company says its new power meter has a variance of less than 0.2Nm – calling it twice as accurate as an their esteemed competitor SRM.

“I’ve ridden on just about everything there is out there, and InfoCrank is the best power meter I’ve had the pleasure of using.

“It has all the info you could wish for – real-time bilateral power, pedal balance, torque efficiency, and all in a robust form packaged in the crankset. The validity of the data is of top importance when using a power meter to train on, and InfoCrank has the highest degree of accuracy you can get.”

Informative. Intelligent. Integrated. Our InfoCrank bike component is designed from the outset as an integrated cycling power meter and road bike crankset. Seamlessly set into the crank arms, InfoCrank’s bike power meter measures each leg’s power with unprecedented precision. No guesses, no math. Just an honest set of numbers that reflect unsurpassed accuracy. The load path, from bike pedal through crank and bike chainrings, is optimized to transmit both data and power.

What power is going in? That’s what moves the bike forward. Heart rate, speed, cadence, time, distance-all outputs. To get results from your cycling training, you need to know input power. That’s the info you need, and that’s what InfoCrank cycling power meter measures like no other bike component. Improve your bike performance with accurate load path measurements in both left and right legs.

InfoCrank power meter road crankset uses a magnetic sensor to measure your cadence – that is, the rate of your cycling pedal stroke measured in revolutions per minute (rpm).

InfoCrank isolates and measures the true tangential force you’re delivering. This turning force is known as torque, and is measured in Newton-meters (Nm).

POWER
Power is measured in Watts (W). It’s the product of cadence (rpm) and torque (Nm). Knowing your power input is the single most beneficial cycling training aid any serious cyclist can have to improve your bike performance.

InfoCrank cycling power meter gives you accurate, reliable power measurement in real time. Easy and intuitive to use, InfoCrank gets you quickly cycling ahead to higher levels of fitness with a minimum of technical fussing.

Robust design for the real world

InfoCrank bike crankset is built to withstand the worst weather imaginable. Anywhere you can rid your road bike, InfoCrank cycling power meter is there for you. It’s accurate in extreme heat and humidity, seldom needs new batteries, and is almost virtually unbreakable.

Data you can trust

Let’s put that into some context. Say riding conditions are 90 rpm with a 300 watt reading (not an unusual operating point for a rider). Say the crank length is 172.5 mm. The maths works out that there is an average torque of around 16 Nm per each crank to produce the 300 watts of power. As this is below the 20 Nm threshold, there is an error band of Â±0.2 Nm, which translates to Â±1.25%. of the actual displayed value. That means your actual power will be somewhere between 303.8 watts and 296.2 watts. Elite riders typically riding above 400 watts and 90 rpm for time trials would produce results with Â±1% of the actual reading.

So accuracy, quoted as a relative value, has to have a reference for us to understand at what point it is actually that accurate. InfoCrank shows you that most of the time you ride the bike with loads that can be measured accurately at Â±1%, while other times, because the load is less, it may be rather less accurate, ±1.5â€“1.75%.

When we talk about accuracy, we also have to talk about â€œdriftâ€. For training and testing purposes, it is key requirement that the power you have showing today in watts is the same as the power that you have tomorrow, assuming the displayed watts are the same.

InfoCrank has been designed to eliminate any drift that may occur during a ride or from ride to ride. Actually having accurate data at the beginning and the end of the ride, and having comparable figures today and tomorrow is a challenge for most power meters and was key in our design specifications.

ACCURATE ON ANY BIKE?

*Lab tests during production have shown that each crank is within 0.5% on average.

InfoCrank power meter uses the ANT+ wireless communication protocol to talk to any compatible bike computer. This ensures that your bike computer has options for power readings, especially left and right power balance.

Setting up InfoCrank bike crankset is straightforward. It’s a bike part that is a quick setup for pro shop techs and easy for capable amateur builders.

Unless you damage your bike crank arm in a crash, you won’t ever need to recalibrate the InfoCrank cycling power meter. These bike parts are calibrated in the factory where it starts life. You never need ro adjust it. But if your bike does get a knock, and you do want the additional reassurance, you can use the ‘calibrate’ function of your ANT+ enabled bike computer.

We’ve set up a network of expert Affiliates worldwide who can help you install your InfoCrank cycling power meter bike crankset. If your bike is already set up properly for a modern road bike crankset, swapping in InfoCrank is a breeze. We’ll help you find a Verve Affiliate near you.