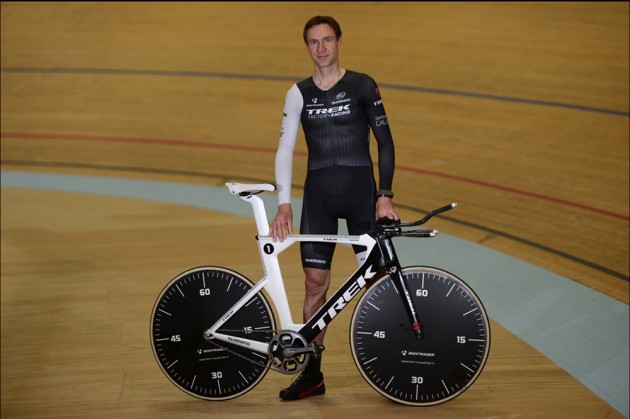 Jens Voigt lowered thew curtain on a stellar career, after trouncing the our record  in Grenchen, Switzerland last Thursday evening.

“I can’t ask for a better goodbye than this,” said Voigt after he beat Ondřej Sosenka’s record by more than a kilometer. “My only thoughts were to not over pace, to focus on holding the black line and to stay aero – no side thoughts. 51.1- yeah I am pretty happy.”

However, the affable German couldn’t sit still for long, as he  announced his intentions to attempt the hour record just two weeks after he assumed a life of retirement.

“I always had it in mind that I wanted to do this, but we could not announce it in Colorado because we did not know when, or where,” he explained. “I knew that I would keep going and kept on training. I was three weeks at the track and only going home on the weekends. The kids were complaining about that and it was a big effort in terms of commitment.”

Known for his incorrigible nature for going out strong, Voigt took to the track like a possessed man, just as soon as the firing gun went off on Thursday evening.

“I started as usual too fast, but that is just me I can’t control myself, and I realized that I was a second faster on the first lap,” said Voigt. “The first 10 minutes I could not feel the pedals and thought, ‘Oh this is easy!’ Then I went, ‘oooooh, maybe you’d better pace yourself a little bit here.”

After a blistering first few laps, Voigt settled into a modicum of pace, before going all out in the final 10 minutes. At one point he could be seen momentarily standing up on the pedals, in an attempt to relieve some of the saddle pressure.

“I remember how Chris Boardman was walking after his effort and I am not far off from that. I am basically limping. It hurts in my glutes,” Voigt concluded. “I am happy that I don’t have to sit on the saddle for the next days now.”