Why Cycling Cleaned Itself Up 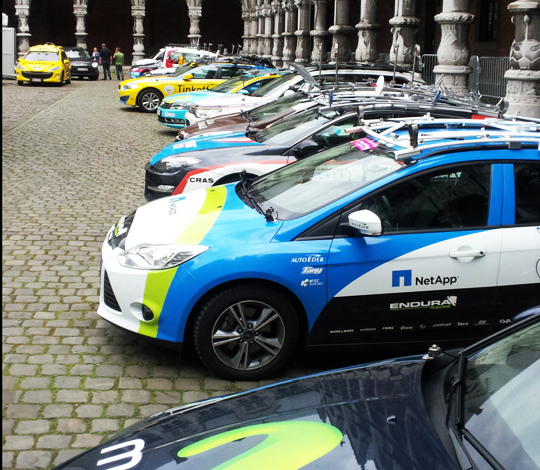 In the small square inside the Palais des Princes-Evêques, where the Liege-Bastogne-Liege teams lined up for their public presentation, a gaggle of managers, directeurs sportif, ex-riders turned ASO staff are crammed into a holding pen, waiting their moment with Daniel Mangeas.

All those names, faces, deeds and histories – you look around at them, with their decades of activity in the sport and you realise, in one glance, that there isn’t a hope in hell of a ‘clean up’ or a ‘reckoning’ in pro cycling. (Actually, ‘reckoning’ is the apposite word with its etymological link to ‘rechnung,’ an adding up and paying the price.) Cycling’s grand ethical reckoning is simply not going to happen.

Looking at the parcel of rogues assembled in that small space, you see the seamless continuity of riders involved in race organisation, team management and even as rider agents. Collectively, the publication of the information stored by the personnel assembled in that cobbled arena would make the USADA-Armstrong affidavits look like a primer. The words, deeds and complicity in decades of shady goings on these men had witnessed – the web-like inter-connectedness of it all – would boggle the mind.

But their complete reluctance to speak isn’t based on a fear for ‘the end of cycling.’ Their collective silence isn’t about an anxiety that ‘it would destroy the sport,’ because it wouldn’t. If those players, these movers and shakers of the sport did reveal what they knew, it would create an unholy media mess. But, more than anything, their testimonies would mean a lot of people would lose their jobs and reputations.

So why, then, would any one of those men volunteer to put their heads on the block, committing reputational and financial suicide, to recount deeds from 20 years ago? Change Cycling Now? The UCI Independent Commission? Become a WADA whistle blower? Forget it. The good news – hard though it may be to swallow – is that it doesn’t really matter.

Cycling has been cleaning itself up since the winter of 2007* when lots of those same people got together in private (without involving the UCI) and realised that they were in danger of putting themselves out of a job. In the light of seemingly endless scandals, sponsors were less and less willing to take a chance with millions of Euros of their marketing money. It wasn’t ethics that forced an internal clean up, it was the real danger of not being able to pay mortgages on second homes. Marx was right, it’s the economic base that determines the superstructure! Or, if you prefer, follow the money.

From the winter of 2007, cycling started to de-tox itself. The men who once were complicit in blood doping, the management who, at best, didn’t ask and didn’t tell, decided that it was probably time to race clean. Sponsors were getting nervous, the tests were getting better, the gains were lower and the risks much higher.

In this scenario, everyone was a winner. Those ‘doping doctors’ who were mostly trying to keep their riders from freelancing and killing themselves (and destroying the team with embarrassing positives), could go back to being sports doctors. The riders who were stressed out at the fear of a positive and paying big money for doping programmes and products could relax (and spend their money on hypoxia tents and winter training camps at altitude).

The current generation of young pros who entered this new, healthier regime didn’t have to worry about doping any more and instead just got on with racing till they hurt, happily ignorant of the culture that preceded them.

Cycling, ironically, has been slowly cleaning itself up from the inside, prior to any revelations in tell-all books and USADA reports. Nevertheless, the old guard has clearly decided that staying quiet, saying nothing and sidling off to the door marked ‘Retirement’ is the best option for all concerned. Ask yourself, if you were standing in their team-issue button down shirt and training shoes, what would you do?

So, for historically specific reasons (increasingly reluctant and wary sponsors, a global economic downturn, improved anti-doping tests and attitudes, economic self-interest and, yes, a bit of an ethical dilemma too), pro cycling has been cleaning itself up without making a massive fuss about it.

What, then, would the testimonies of these men gathered in the Palais des Princes-Evêques add to that process? There would be lurid headlines, gory stories and a bit of score settling, but not much else in cycling’s slow ride back to credibility. Maybe it really is time to let those old sleeping dogs lie?

Note: I’m not suggesting that all of the people involved in the Liege team presentation were involved in illegal doping or that the personnel attached to the team cars in the photo are ‘guilty’ of something. All I’m saying is that they all have information that UCI/WADA would probably find useful. And none of them will tell anyone anything.

* Edited, May 1. The first published version said the meetings took place in winter 2008, but I checked my notes. It was the winter of 2007 going into 2008 when several teams met informally to discuss what would turn into the UCI-endorsed bio-passport.