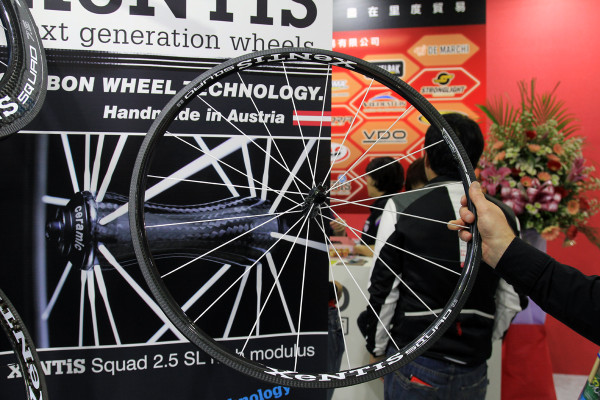 Xentis unveiled it’s new Squad SL 2.5 carbon tubular and clincher wheelsets at this month’s Taipei Cycle, and not surprisingly, their claimed weights are some of lightest specifications we’ve ever seen.

The 2.5 is the latest low profile wheel from Austrian "mad scientists", that feature a newly designed carbon hub, along with the option of 16 or 21 spoke lacing up front, with a standard 21 count in the rear. At a claimed weight of 880g, I can think of very few, if any, wheels that would rival these specs.

By machining down the resin on the braking surface, Xentis not only achieved additional reduction in weight, but they claimed to have improved overall braking as well. In fact, as a result of this change, Xentis had to partner with SwissStop to create a new pad compound that provided just the right amount of density.

While official pricing and availability are still forthcoming, we’d venture to say, that the new Squad SL 2.5’s won’t come cheap. But, then again, nothing of high quality that’s made in-house in Europe is.   😉