A New generation of Exceptional Cyclocross Talent is Emerging 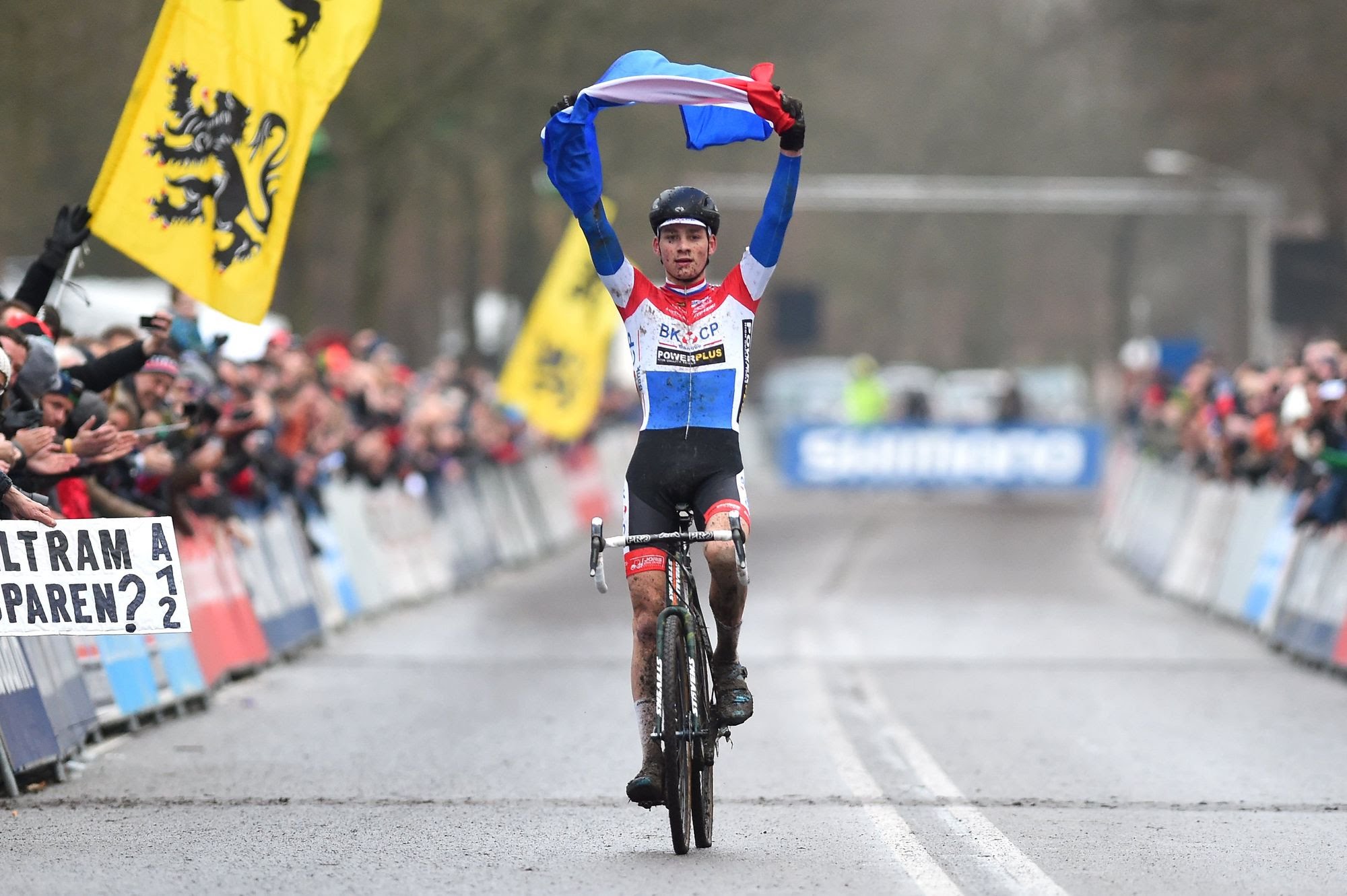 It needed a calculator to count up the riders’ ages in days and weeks and then double check it all. But there was no mistake. The riders made up a historic trio: “The average age (21) of the podium of the last Men Elite World Championships, two riders of whom were promoted from the lower age category, was lower than that of the Under-23 podium”, says Peter Van den Abeele, UCI Head of Off-Road.

The Dutch rider Mathieu Van der Poel, an exceptional World Champion at just 20 years of age, the Belgian Wout van Aert (21) and Dutchman Lars Van der Haar, the eldest of the winning trio at a stately 23 years old, have launched a new era of cyclo-cross. While Van der Haar was the first to win a World Cup event, on 23 October 2013, he is not the most precocious of the group. Just six days after his 20th birthday, Mathieu Van der Poel won the Hoogerheide round of the UCI Cyclo-cross World Cup on 25 January 2015. “Mathieu also won the Junior Road Race at the 2013 UCI Road World Championships; I think he could perform at the top level in any discipline,” says Van den Abeele.

Julien Taramarcaz, Switzerland’s best rider who lives in self-exile in Belgium 300 days a year, has witnessed the rise of these phenomenal young riders from the inside: “For Mathieu, cycling is simply a game. He could do freeriding, dirt jumping or road, it’s all the same for him. You also have to admit that his genes are not too bad,” smiles Taramarcaz. Taking a closer look at the cycling achievements of Van der Poel’s forebears simply highlights the exceptional nature of Mathieu’s talent: Raymond Poulidor, his maternal grandfather, had eight podium finishes in the Tour de France between 1962 and 1976 although he never pulled on the yellow jersey. And his father, Adri, had to wait until he was 36 before winning his first and only cyclocross world title in Montreuil in 1996.

Overall winner of the 2015-2016 UCI Cyclo-cross World Cup (winning the first round in Las Vegas), Belgium’s Wout van Aert is the other main attraction this season: “He and Mathieu know each other very well and have ridden together for several years. They have really brought each other on. Mathieu has the better technical skills but Wout has a very big engine,” says Quentin Jaurégui. Now a professional rider with AG2R La Mondiale, Jaurégui stood alongside the duo on the podium of the 2012 Junior Cyclo-cross World Championships. “You can’t give van Aert any leeway in a race. If you make the slightest mistake he really knows how to take advantage”, analyzes Taramarcaz.

By early January, the young Belgian rider had fourteen victories, making him the most prolific winner of the winter. Leading three series: the UCI Cyclo-cross World Cup, Superprestige and BPost Bank Trophy, van Aert has racked up the wins seemingly effortlessly.

The Netherlands’ Lars Van der Haar is the only top-level rider who is a member of a UCI WorldTeam (Giant-Alpecin). Van der Haar came under the spotlight upon his arrival in the Under-23 category, winning the U23 rainbow jersey twice. Not surprisingly, Van der Haar joined the Elite category early. Van der Haar’s overall victory in the 2013-2014 World Cup, winning three rounds in the process, confirmed the immense talent of this protégé of Richard Groenendaal (2000 World Champion). Victory for Van der Haar on 31 January would mean two rainbow jerseys in a row for the Netherlands.

Is this trio exceptional – or will others follow in their footsteps? Taramarcaz offers an answer: “We are already seeing other riders who look very impressive upon joining the U23 category. In particular, Eli Iserbyt is dominating U23 a year after riding with the Juniors.” The Belgian rider became the youngest-ever winner in the U23 category, crossing the line first in Koksijde just a few weeks after his 18th birthday. In a recent TV programme, Niels Albert, Paul Herygers and Sven Nys predicted that this new generation would dominate for a decade.

Facing this tide of new talent, Nys, the “Cannibal from Baal”, aged 39, earned the respect of his peers by winning the Koksijde round of the World Cup, ahead of van Aert, Van der Poel, Van der Haar, Sweeck, Meusen and Aerts, all born between 1993 and 1995. It was a great podium photo. Seventeen years after his professional debut with Rabobank, where he rubbed shoulders with a certain Adri Van der Poel, Nys is alive and kicking. Generations have come and gone. But Nys is still there. The old lion has seen a confident, brilliant generation burst onto the scene. A generation that seems built to last.