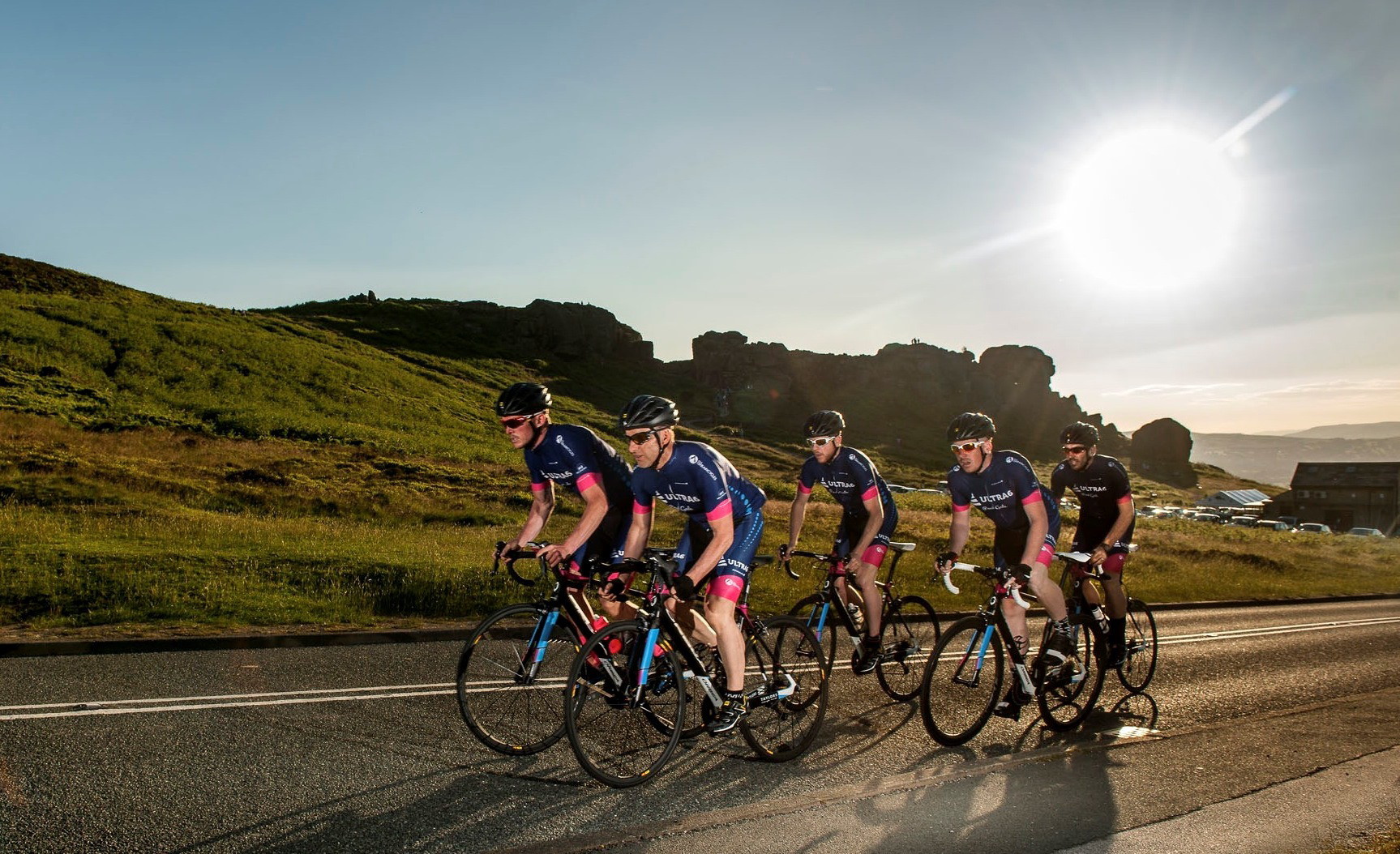 A group of 5 amateur cyclists, who call themselves, Ultra6, have set 3 new world records upon the Tour de France’s fabled Mont Ventoux.

Using Mount Ventoux as their backdrop, Ben Wood, Nick Jovanovic, Matt Robinson, Andy North and James Welsh effectively cycled 100,000ft (the equivalent to the edge of space), on a single stretch of road over a four-day period as part of their ‘Race to Space’ challenge – eclipsing the previous record of 65,000ft.

Completing the challenge in four days, 16 hours and 14 minutes, the riders amassed 19.35 ascents and descents, which was also enough to give them the record for both the fastest and highest vertical ascent by a team of cyclists.

Ultra6 are no strangers to cycling challenges, as the quintet cycled 240 miles from Leeds to Dortmund in 22 hours last year, while also running a marathon every day and cycling 100 miles on seven consecutive days from Land’s End to John O’Groats in 2013.

North said that preparation on the Yorkshire hills gave them “the best opportunity for success” but “when we arrived in France, we were faced with temperatures of 40°C which took some getting used to”.

The World Record attempt was to become the first to cycle 100,000ft vertical ascent and descent on one continuous mountain climb, the mountain that was selected was the famous Mont Ventoux with its lunar landscape. The most anyone has achieved prior to this was 65,000ft, with a few people also attempting to do an Everest at 31,000ft.

The team of Andy North and Nicky Jovanovic from Guiseley, Ben Wood, Jimmy Welsh and Matt Robinson from Keighley have been planning and training for this extreme challenge for the past 12 months. “We had to train through the winter months on our local Yorkshire hills to ensure we had the best opportunity for success, you know if you can survive the harsh conditions whist out on a Yorkshire training ride then you can survive anything the French weather can throw at you” said Andy North or this is what we thought until arriving in France and faced with 40oc hot sunshine every day, this posed a real problem during the first couple of days as the team adjusted themselves with ice packs and lots of water to cool the core temperature.

It was a major logistical challenge to transport all the bikes and equipment out to France, this was made all the harder as the Port of Calais was closed due to the France strikes, so extra money was required to re book and travel Hull to Rotterdam and then drive down through Belgium, Holland and France and on to Mont Ventoux.

The team were provided with the latest Spanish Orbea bikes by Allterrain Cycle Store in Shipley and Wetherby who’s Ultra6 race team leader Ben Wood works as head Mechanic, the Orbea bikes are the latest light weight production bikes and are currently being used on the Tour De France by team Cofidis. The team kit was then produced by Endura to match the colour scheme on the bikes. (see picture attached) Ben Wood said “

We knew that we needed to have the best and the lightest equipment for this challenge and are really grateful for all the support we have received from our sponsors and supporters.”

Two of the team Andy North and Ben Wood are no stranger to extreme challenges previously setting a world record for running a marathon and cycling 100 miles each day for 7 days Lands End To John O’Groats and also completing the famous Sunshine Challenge from Catteric Garrison to Gibraltar that included kayaking the Themes and English Channel. Last year they were also involved with the Lord Mayors cycle around Europe and LOFTY appeal, motivating school children in the Leeds area.

Ultra6 have continued their support for ABF The Soldiers Charity who provide support for all service and none service Soldiers and their families. And this year have also supported M4Melanoma.

The Race to Space challenge is sponsored by a local successful businessman Dave Gale who helped and supported the team during the build up and throughout the whole challenge. David who lost his son earlier this year wanted the team to succeed in memory of his son Paul Gale.

Prior to the challenge the whole team had regular Chiropractic care at Advanced Wellness in Ilkley and also Iain Harris physio support in Crosshills, In addition Ben Wood and Andy North spent time at The Sports Science department at Trinity University in Horsforth that provided metabolic testing, endurance testing and sports psychology, this all helped to achieve the success on the mountain.

During the race to space challenge most of the team spent a minimum of 12hours in the saddle cycling up and down Mont Ventoux 4 times each day, with an average gradient of 7.5% and in the middle 6 mile forest section having long straight roads of over 13%. All in all this was also a total of over 100miles cycled each day for 5 days.

Andy North said, “This was as much a battle with your mind as it was with the physical challenge, this year we had trained in basic Yoga techniques and this helped to stay calm and focused whilst out on the continuous 13.5 miles steep wall of tarmac that continually faced you. The other big challenge were the swarms of fly’s that tried to feed off your perspiration, getting into your nose, mouth and ears whilst in the 6 mile forest section”.

Matt Robinson said “it was a nice end to the challenge when the local cycling Museum in Bedoin that displays the history of Mont Venoux and the Tour De France got really interested in our record and now want to display our team jersey and showcase Race to Space.

The race to space challenge is recognized as such an extreme cycling challenge the team feature on ITV4’s The Cycle Show on Thursday evenings during the Tour De France race.