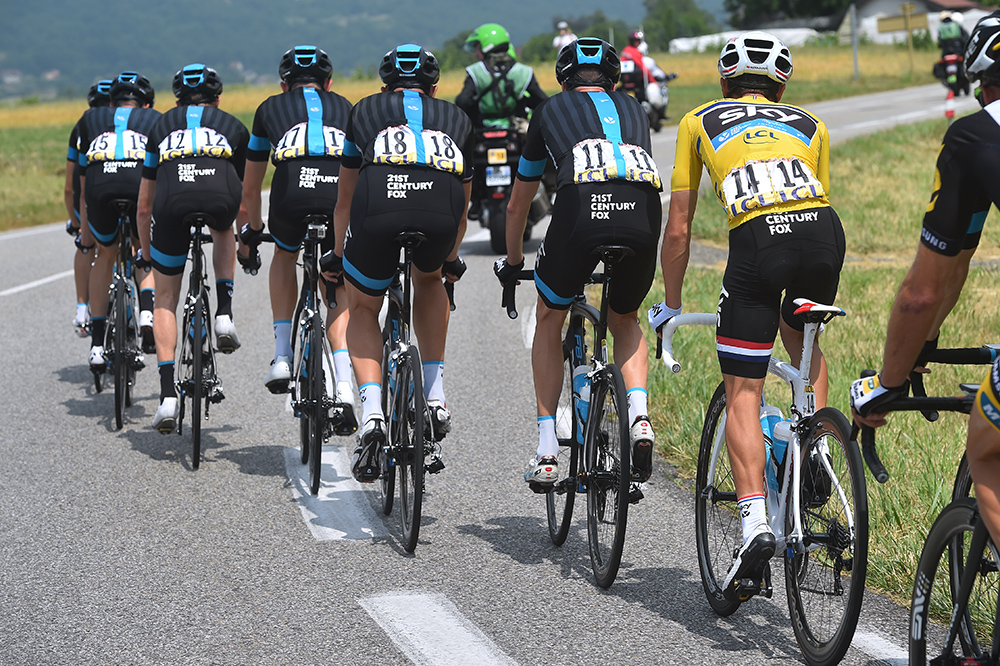 The UK’s anti-doping agency (UKAD) is investigating further allegations that Team Sky may have injected some of its riders with Fluimucil and other substances to aid recovery, even after cycling’s governing body, the UCI, had enacted a “no needles” policy during races in 2011.

According to reports, someone on the inside of Team Sky allegedly contacted UKAD, claiming the British squad may have knowingly violated the policy while “walking the line”.

The new development in UKAD’s inquiry into allegations of possible wrongdoing of Team Sky, follows a whistleblower letter sent to the chairman of British Parliament’s committee on culture, media and sport committee, Damian Collins, who has held several hearings as part of its inquiry into doping within sport back in February.

The anonymous letter came from a source who identifies him or herself as “a Sky insider”.

A spokesperson for UKAD said, it “does not discuss or disclose information in relation to its investigations”, while a spokesperson for Team Sky said: “It is right that any concerns are reported to and dealt with by the appropriate authorities, and we will continue to co-operate with them.” Team Sky added they have yet to be contacted regarding the allegations by “any of the relevant authorities – Ukad, DCMS, UCI, Cycling Anti-Doping Foundation”.

The letter expands on allegations previously reported from another former Sky member, who said team doctors had used intravenous “recovery” methods involving vitamins and amino acids, before May 2011. The practice was common at professional teams before that date.

The letter presents a possible explanation for the controversial affair of the bag delivered to the then Team Sky doctor Richard Freeman at the end of the Critérium du Dauphiné in 2011. It alleges the bag may have contained the decongestant Fluimucil as stated by the Team Sky head,  Dave Brailsford, to the DCMS committee in December, but that the Fluimucil may have been for the purposes of injection to aid recovery.

Fluimucil is a brand name of acetylcysteine, an amino acid important in the synthesis of glutathione, a muscle anti-oxidant that aids recovery; it is also commonly used as a decongestant. Freeman claims the package, which was couriered from the UK to France by a British Cycling employee, contained Fluimucil and that he gave it to Sky’s Bradley Wiggins via a nebulizer to clear his airways.

Brailsford, said in his testimony before the DCMS committee back in December, that Freeman had informed him the substance in the package delivered by Simon Cope was Fluimucil, “a decongestant that you put in a nebulizer. I couldn’t see any anti-doping rule violation.”

However, Fluimucil was also used commonly in “injectable recovery” at professional cycling teams. Massimiliano Mantovani, the former team doctor at Barloworld, confirmed the team had used Fluimucil by injection as an antioxidant before the no-needle ban came into force, reiterating that it was “totally legal, absolutely legal”.

The current Team Sky leader, Chris Froome, confirmed in January that while at Barloworld he had been given Fluimucil by injection. There is no suggestion of any wrongdoing on his part.

Additionally, the letter also alleges that the bag may have also contained needles and other injectable recovery products such as vitamin B12. At the time the UCI’s needle ban extended to two days after competition. However, the mere possession of needles within the window if discovered at the time would have been viewed as a contravention of the no-needle policy. This specific point was put to Team Sky’s spokesman, who was unwilling to expand on the team’s previous comment in light of UKAD’s ongoing  investigation.

The whistleblower claims the team began to use injections for recovery after some riders at Sky felt as early as the team’s first year on the road, 2010, that the initial policy of avoiding their use was inhibiting their performance. As a result the team’s medical policy was adjusted and one of the doctors at the squad, David Hulse, who did not agree on ethical grounds with the move, even though it was within the rules, was sidelined from working at the 2010 Tour de France and left the team at the end of the season.

Late in 2010 Sky also broke with its stated policy of employing only doctors who had no past within professional cycling, hiring Fabio Bartolucci from Italy and the Belgian Geert Leinders, who was subsequently banned for life for his activities at the Rabobank squad before being hired by Sky. Brailsford has stated this policy change was made following the death of a team carer, Txema Gonzalez, and that Leinders was hired after being thoroughly interviewed and that he misled the team over his doping past. There have been no allegations of wrongdoing relating to Leinders’ time at Team Sky.

At that point, Bartolucci had already worked with at least one British cyclist, Nicole Cooke, before joining team Sky, with no indication of any wrongdoing leading up to that.

However, the whistleblower alleges Bartolucci was hired by Sky because of an apparent reputation as an expert in “recovery” – although another Team Sky source has gone on record saying this would have been impossible to verify – and that he left the team after the needle ban came into effect.

Bartolucci has since commented on the matter, by saying, “I am very disappointed with the way that this story has been written because I do not recognize this. I have my personal story in cycling and it is not this one.”