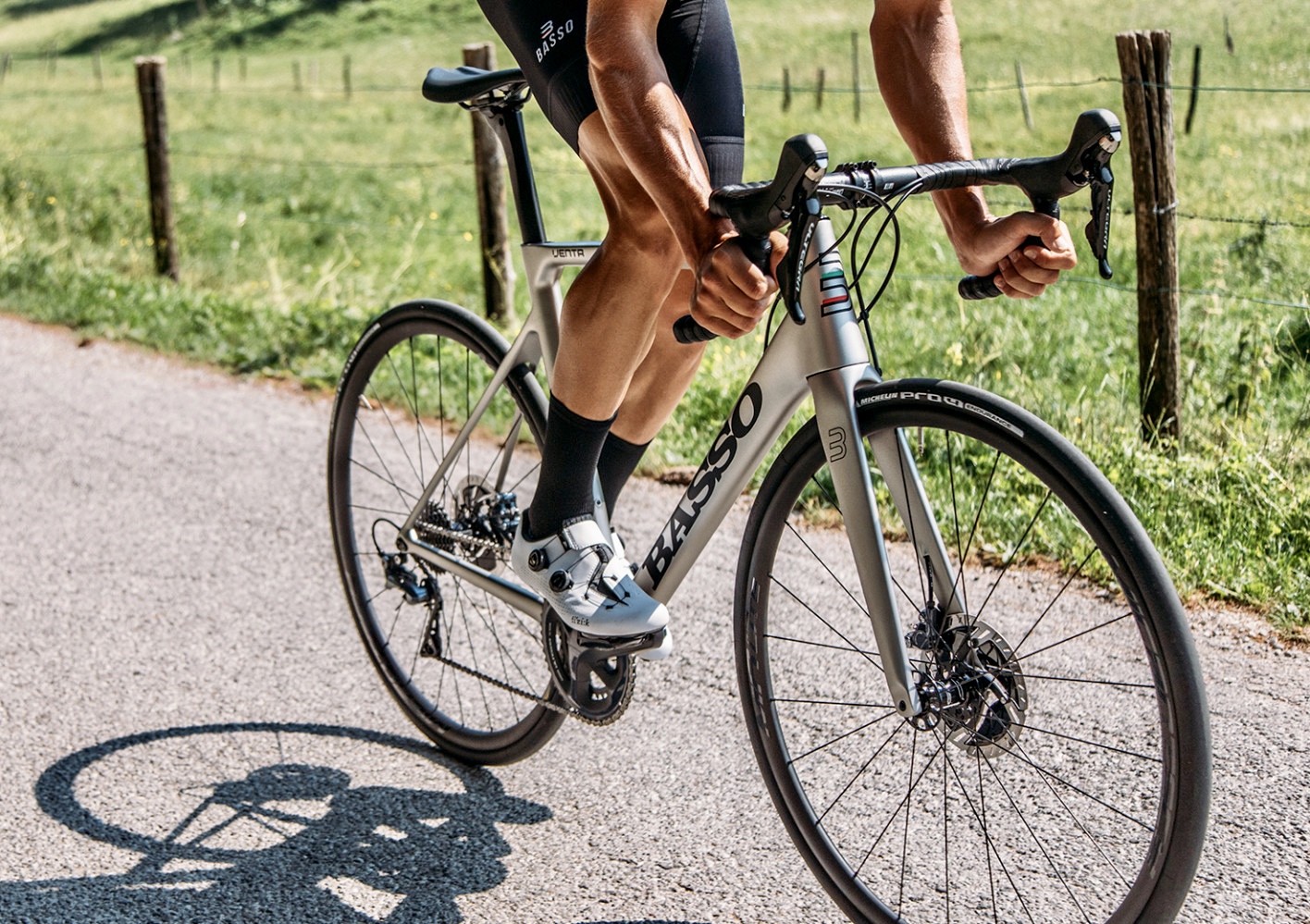 To celebrate two decades of success with its popular Venta road frame, Basso has unveiled a 20th anniversary model that derives many of its attributes from Italian brand’s flagship Diamante models.

“The 20th anniversary Venta model blends head turning and function driven design with performance that makes it a more than capable race ready steed. Sleek lines and minimalist graphics make sure that this frame perhaps one of the most elegant within its segment. While aesthetics go a long way into defining the beauty of the Venta model it is the craftsmanship that sets this frame apart from its competition. Made by hand, in Italy, by Basso and with the same extreme attention to quality and detail used to make the most premium frames in the range, the Venta represents a fantastic value proposition. Made to race, made to last, the Venta is built to give lasting performance for years to come. It’s beautiful shape and construction meet with advanced features, generally reserved for higher tier offerings, thus making for an even more interesting offer. Internal cable routing and integrated seat post clamp make for a clean aesthetic while the oversized bottom bracket and reinforced head tube junction make for an extremely reactive construction,” says Basso.

First introduced in 2000, the Venta represented one of the first carbon frames of its kind, featuring bold tube shapes and profiles that were well outside the norm of typical round tube construction, as well as innovative cable routing, brake placement and seatpost design.

There was also a special paint process that was well ahead of its time that gave the original Venta a near mirror finish.

“The first Venta came to life during a period when carbon fiber road frames were still semi-rare and almost always round tube construction. The Venta wasn’t innovative merely for being made of carbon during the transitional era of the material, but rather because of the Avant Garde nature of its form, design and performance. Wildly different from anything else available it represented extreme design in addition to structural efficiency to make it both aerodynamic and reactive. It was a perfect example of the Basso Bikes mission to create products that are beautifully functional and functionally beautiful. Every detail was scrutinized, from cable routing, to brake placement to seat tube design…in order to make a bike well ahead of its time. As groundbreaking as the frame’s structure was the paintwork was just as revolutionary, “ adds Basso.

The latest Venta continues in the tradition of Basso’s peerless, made-in-Italy craftsmanship and innovative design, featuring the company’s ALU Free Construction (meaning no metal added in either bottom bracket or steer tube, true full carbon construction), compatibility with either mechanical or electronic groupsets, full internal cable routing, an oversized steer tube, conical shaped headset, an integrated wedge-style seatpost clamp and enough clearance for tires up to 28mm, with availability in both disc and rim brake versions.

And, if color is what you’re after, the Venta is available in three stunning colorways, Anthracite, Silver and Purple.

Additionally, while the Venta shares a similar race-inspired geometry as the Diamante, a higher stack height and a shorter reach across all seven sizes give the rider a more upright and relaxed position.

According to Basso, the Venta will be available as a complete bike as well, offering a number of different builds ranging from Shimano 105 to Ultegra, including wheels from Microtech – starting in August.

You can learn more about the 20th Anniversary Venta by visiting Basso’s website here, and for sales in the USA here.