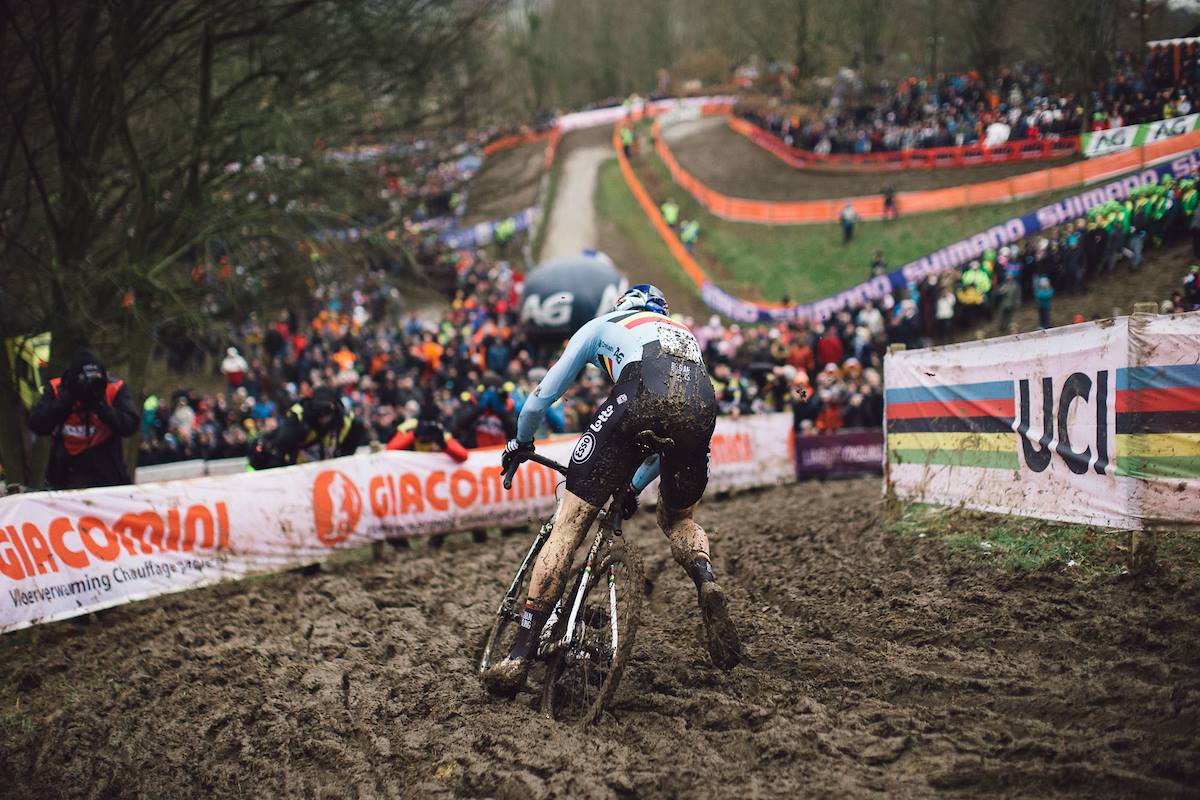 The second day of the UCI Cyclocross World championships in Valkenburg-Limburg (Netherlands) featured two big races in the muddy clay of the famous Cauberg climb. The biggest race of the weekend was won by a mud-clad Wout Van Aert (Belgium). He captured a third successive title in the Men Elite category after a long solo ride on a cold Sunday afternoon. A few hours earlier, Eli Iserbyt won his second world title in the Men Under 23 category as the snow came down.

After a weekend full of spectacular muddy races in Valkenburg-Limburg, the Belgium team heads back home with three gold medals in the pocket, winning in the Men Elite, Women Elite and Men Under 23 category. Great-Britain took the wins in the Men Junior and Women Under 23 category. The home country organized a great event that attracted massive crowds and a splendid course. They even won a medal in each category but missed out on the top spot. Next year, the UCI Cyclocross World championships are hosted by Bogense, Denmark.

Coming into this world title race, home rider Mathieu van der Poel (Netherlands) was the big favorite. He won 26 out of 32 races this season on all types of terrain. The only major challenger seemed defending champion Wout Van Aert, who switched focus from the series to this one race quite early in the season. In his typical attacking style, Van der Poel surged away during the opening lap but in contrast to other races, he was unable to shake off Van Aert. During the second lap, Van Aert took the initiative. In one of the deep-mud sections Van Aert ploughed away from the struggling Dutch ace. In no time, the gap grew up to twenty seconds. Mentally Van der Poel took another blow when Michael Vanthourenhout (Belgium) bridged up with him. While Van Aert continued to ride away and halfway the race he was 1:30 ahead of the duo Van der Poel and Vanthourenhout. They would continue to battle for second place, with Toon Aerts (Belgium) following at short distance. During Van Aert was nearly two minutes ahead of the first chaser when he suddenly went over the handlebars in the fifth of seven laps. It proved to be a minor scare as he quickly recovered and continued to expand his lead and ride towards his third world title.

Vanthourenhout managed to drop Van der Poel for good during the same fifth lap. Little later, there was some minor snowfall as Van der Poel ended up in a battle for the remaining podium spot with Toon Aerts. Somehow, Van der Poel bounced back and secured the bronze medal. Van Aert had time to celebrate his victory and he crossed the line while raising his arms as he stood up on the pedals. More than two minutes later, an emotional Vanthourenhout grabbed silver ahead of Van der Poel. Toon Aerts no longer pushed and finished fourth at 3:16. Lars van der Haar (Netherlands) was best of the rest at 4:29, finishing ahead of a surprisingly strong Gioele Bertolini (Italy). Belgian riders Tim Merlier, Laurens Sweeck and Daan Soete were the next to cross the finish line. Steve Chainel (France) closed out the top-10 in Valkenburg.

Sanne Cant (Belgium) defended her world title in style as she took a solo victory in the Women Elite category on Saturday afternoon.

The mud-fest on the flanks of the Cauberg resulted in a thrilling duel between two of cyclocross’ leading ladies, Cant and Katherine Compton (USA). In a race of four laps with 41 starters from 16 nations, 27 year-old Cant passed early leader Christine Majerus (Luxembourg) at the end of the opening lap. Little later, also Compton passed Majerus as she found a great rhythm on the tough course and during the second lap she clocked the fastest lap of the race. The 39 year-old American rider bridged up with Cant halfway the race. Majerus trailed the two leaders by 32 seconds and found Lucinda Brand (Netherlands) on her tail. The rest of the field seemed out of contention for the medals.

Cant collected a small bonus on the slippery and twisting long descent in front of the casino. Little later, Compton returned and took over the command when Cant started struggling to hold the wheel, slipping away on three occasions. Compton hit the final lap with a bonus of eight seconds on the Belgian rider. Game over? That wasn’t the case since Compton was no longer finding the best lines while Cant kept her composure. At the first pit area Cant bridged back up and with a last effort Cant pushed herself just ahead of Compton into the technical descent. Again, she gapped her American rival and this time she was gone for good and grabbed her second rainbow jersey. Twelve seconds later, Compton finished as runner-up at worlds for the fourth time in her long career. Last year, Brand got beaten on the line for third place but this time grabbed the bronze medal, winning a long battle against Majerus.

The expected duel between titans Eli Iserbyt (Belgium) and Thomas Pidcock (Great-Britain) was never a topic during the race in the Men Under 23 category on Sunday morning. Last year’s Men Junior UCI Cyclo-cross world champion Pidcock didn’t have a great start on the muddy course and never made it back to the front of the race. Defending champion Joris Nieuwenhuis (Netherlands) had a difficult season but he clearly wasn’t planning to give away his rainbow jersey without a fight. Nieuwenhuis took a blistering start and halfway the opening lap he was alone in front at the long steep run-up. At the same time, Iserbyt dropped his fellow chasers and went in pursuit of the Dutch leader. During the second of five laps, Nieuwenhuis slipped away at the first off-camber descent which broke his shoe. Iserbyt bridged up and quickly left Nieuwenhuis behind at the first pit zone. The latter then had to switch his shoe at the second pit zone and the gap was suddenly 17 seconds.

From there, Iserbyt kept expanding his lead despite going over the handlebars in the long technical twisting descent. During the penultimate lap Yan Gras (France) bridged up with Nieuwenhuis, with the rest of the field out of contention for the medals. During the final lap, snow started coming down on the mud-clad riders. It didn’t bother Iserbyt who grabbed his second world title, two years after his win in Heusden-Zolder (Belgium).

Nieuwenhuis managed to shake off Gras and grab the silver medal at half a minute from Iserbyt. Gras was delighted with the bronze medal at short distance. Adam Toupalik (Czech Republic) never managed to get in the mix for the medals, finishing fourth at 1:25, well ahead of Belgian champion Thijs Aerts (Belgium). Favorite Thomas Pidcock was fifteenth at almost four minutes.

Top favorite Evie Richards (Great-Britain) captured a commanding victory in the Women Under 23 category. It’s the second world title in this category for the 20 year-old woman from Malvern. Two years ago, Richards won the inaugural world title race in Heusden-Zolder (Belgium).

Forty young women ran and rode three laps on the muddy course, with Emma White (USA) and Ceylin Del Carmen Alvarado (Netherlands) charging away early on. Richards had a good start but she slipped away several times and lost contact with the two leaders. Halfway the opening lap, Richards recovered and together with her surprisingly strong compatriot Harriet Harnden, she bridged up with the two leaders. The top favourite kept charging forward and just before the race was halfway she started her solo. With two laps to go, she was 20 seconds ahead of compatriot Harnden and ten more on Emma White.

While Richards had the race under control, a battle for the remaining podium spots unfolded. White faded back and Harnden was passed by early leader Del Carmen Alvarado and Nadja Heigl (Austria). When hitting the final lap, Richards had a late scare due to a shifting problem but her lead was big enough to hold onto her lead and capture a deserving victory. A mud-clad Richards crossed the line with the Union Jack in her hand. Del Carmen Alvarado rode away from Heigl and was more than pleased to be best of the rest on home soil. Heigl captured the bronze medal, well ahead of Harnden.

The Men Junior category kicked off the 2018 world championships on Saturday morning. Ben Tulett – a first-year Junior – surprised by winning the first race of the championships.

Early on, pre-race favorite Loris Rouiller (Switzerland) led the field of 74 riders together with 2017-2018 overall Telenet UCI World Cup winner Tomas Kopecky (Czech Republic). Late in the opening lap, Tulett bridged up to the leaders with a large group. The deep mud started to tire the riders and halfway the four-lap long race, Tulett opened up a big gap over a fading Rouiller and others at the long run-up. Kopecky didn’t give up and halfway the penultimate lap the tall Czech quickly closed the 15 seconds gap. The duo hit the final lap with a bonus of nine seconds on Lane Maher (USA). The race was decided when Kopecky struggled in a slippery off-camber section before the first pit area. The 16 year-old British rider made no more mistakes and captured the win. Kopecky grabbed silver at 22 seconds. Ryan Kamp had a great final lap and took the final podium spot at half a minute from winner Tulett.