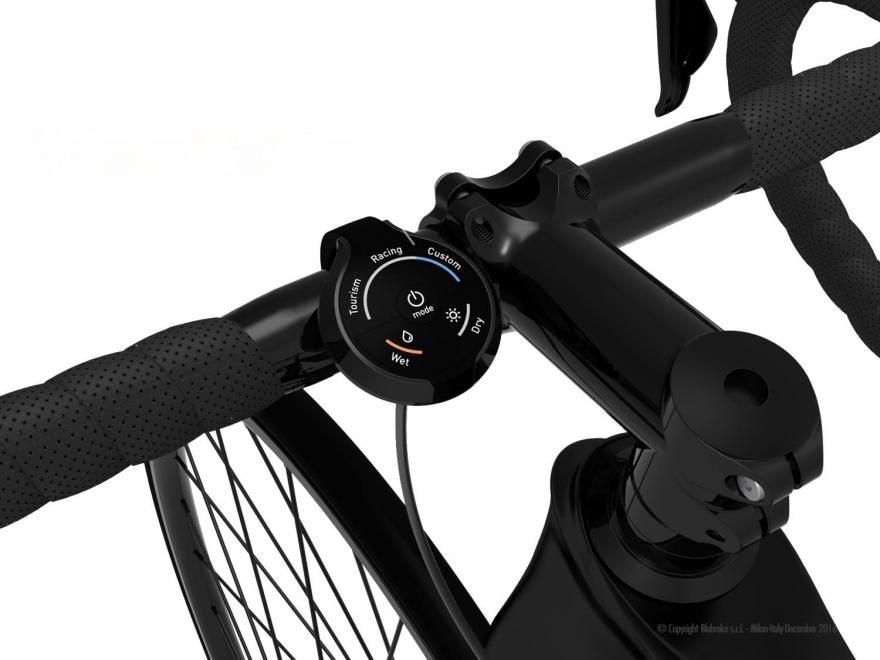 Gee, it’s usually the Japanese or Germans who are the first to bring about some new highbrow piece of bike technology, but believe it or not, in this case it’s actually the Italians.

Indeed, the Italian company Blubrake has developed a new anti-lock braking system in partnership with Pinarello, that’s designed to prevent the front wheel from locking up under harsh braking situations, by using a range of sensors that alerts riders when the front wheel is about to lock-up based on vibration detected by the brake lever.

However, unlike anti-lock braking systems found on automobiles, Brubrake is not self-actuating, meaning the system warns riders based on sensor feedback when the front wheel is about to lock-up, thus telling them to ease up on braking.

“Our idea was to put the rider in the center of the braking, without isolating them like traditional ABS systems do in extreme conditions by taking over”, says Blubrake’s Fabia Todeschini. “We give the rider a sixth sense, by using algorithms and artificial intelligence to predict front wheel lock-up, which can result in a loss of control.”

Blubrake is comprised of four parts. At the center, is an Artificial Intelligence Control Unit and Inertial Measurement Unit, which is hidden away inside the bike’s seat tube, that contains both accelerometers and gyroscopes in order to detect critical data such as the gradient of the road and angular velocity. In addition, a speed sensor is fixed to the front hub, along with a vibrating motor on the brake lever, which the company refers to as its Sixth Sense Haptic Actuator technology.

The final part of the system entails the control interface, which is mounted on the handlebar. This device provides the rider with four settings which can adjust the system’s sensitivity based on terrain and riding conditions, using Blubrake’s own smartphone app.

Blubrake says its system is not aimed at supplanting a cyclist’s riding skills, but instead intended to help improve braking and safety under extreme conditions.

According to Blubrake, Pinarello is currently onboard with them to further help refine the system, which they say will be able to adapt to virtually any brand or style of bike.

“Our goal is to provide the best performing technologies to our riders and help them to be better performing and safe. The strategic partnership with Blubrake is in line with our goal and demonstrates our ability to innovate,” explains Fausto Pinarello.