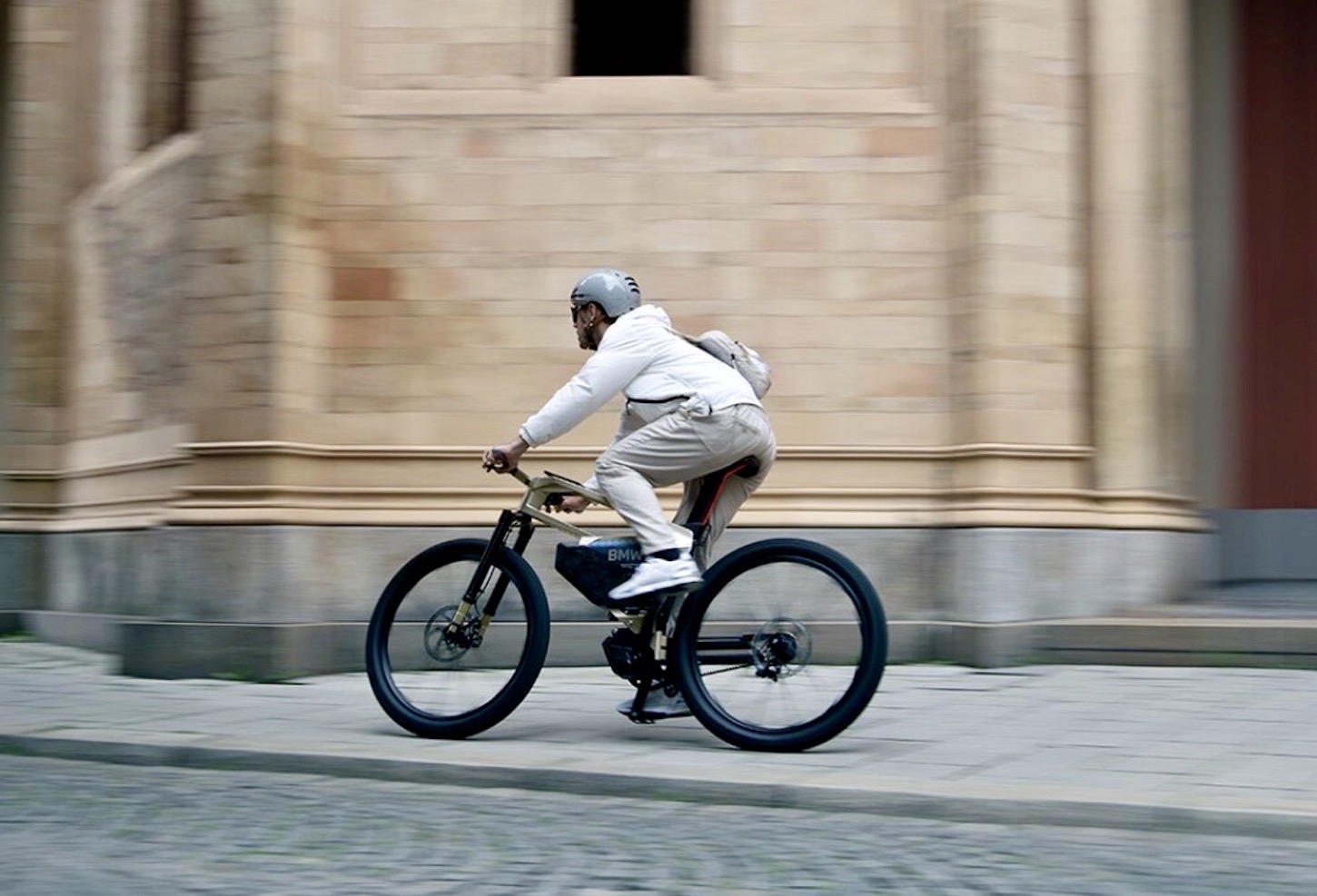 BMW is dazzling city-dwellers with its latest eBike creation called the i Vision AMBY, presenting what the marque automobile brand calls “a visionary two-wheeled solution for the urban mobility of tomorrow.”

“From the outside, the i Vision AMBY looks similar to an e-bike, but it offers significantly more possibilities. It is one of five different concept vehicles with which the BMW Group is presenting its vision of individual mobility in cities and their surrounding areas at the IAA Mobility event. Under a single umbrella spanning electric mobility, digitally and sustainability, the five pioneering concepts create a versatile mobility mix on two and four wheels fueled by sustainable thinking which comprehensively addresses an extremely wide range of mobility needs,” says BMW.

Taking its name from the neologism for “adaptive mobility”, the i Vision AMBY is a pedelec (pedal electric bicycle) with an electric drive system that has three speeds: namely, 25 km/h (15.5 mph) for cycle tracks, 45 km/h (28 mph) for city center roads and 60 km/h (37 mph) for multi-lane roads. While each speed requires certain licensing to drive, the i Vision AMBY interestingly uses geo-fencing to know where the bike is, thus allowing it to automatically adjust its top speed.

The i Vision AMBY is also supposed to look different than a standard e-bike. Rather than looking slim and slender, the AMBY is designed to look thick, strong, and durable. BMW claims its design is a combination of e-bike and racing bike. There’s also a clever little smartphone pad under the handle bars, so you can mount your phone for navigation or media. In addition, the handle bars get a small LED light strip underneath, which not only looks cool but helps with safety at night.

Additionally, there are quite a few safety features that punctuate the i Vision AMBY such as ABS, automatic high-beam assist, brake light assist, daytime riding lights, and even a proximity sensor that provides an audible beep to the rider when a vehicle is closely approaching the rear of the bike. There’s also 2,000 Wh battery pack that’s mounted in the center of the frame that provides up to 300 km (186 miles) of charge, along with an electric drive unit that’s mounted next to the pedal that sends power, through a belt-drive system to the rear wheel. It also gets 120 mm of suspension travel to handle a wide variety of surfaces, as well as integrated brakes with internally-routed cables, giving the bike a very streamlined look.

“Everywhere you look, apparently established categories are being blown apart – and that’s a good thing. In the future, classifications such as ‘car’, ‘bicycle’ and ‘motorcycle’ should not determine the nature of the products we think up, develop and offer,” explains Werner Haumayr, Vice President BMW Group Design Conception.

“Rather, this paradigm shift gives us the opportunity to tailor products to people’s lifestyles – as we can see with the BMW i Vision AMBY high-speed pedelec. This vehicle occupies the space between a bicycle and a light motorcycle and allows our customers to decide for themselves whichc roads or routes they want to travel on through an urban area. They have all the flexibility possible, at the same time as turning the pedals and keeping themselves fit. The modes and clever route selection are intended to make it one of the fastest travel options through a city,” he adds.

While typically bikes don’t have keys, the i Vision AMBY has a digital key function that relies on the rider’s smart phone to upload his or her license information for certain speed limits, and even update any insurance needed on the fly.

Also, with the BMW app, the rider can check the battery status and range and get over-the-air updates. There’s also a free programmable immobilizer, allowing smart, remote theft protection.

Interestingly, there’s also a BMW Motorrad version simply called the Vision AMBY, which is similar to the i Vision AMBY, but with some sportier tweaks.

For instance, the frame of the Motorrad version is slightly different, with a unique single-sided rear swing arm that connects the rear wheel. It also gets much chunkier, knobbier tires. But, the biggest difference between the two is the Motorrad version’s ability to accelerate without the rider pedaling.

BMW says the i Vision AMBY and the Vision AMBY are clear examples of the storied German carmaker’s focus on urban-mobility and sustainability, relying on secondary metals and brake fluid that’s derived from rapeseed oil, while parts of the handlebars and battery covers are manufactured from floating grey polymers and recycled plastic is used in the making of the bumpers in order to reduce the company’s impact on the environment.